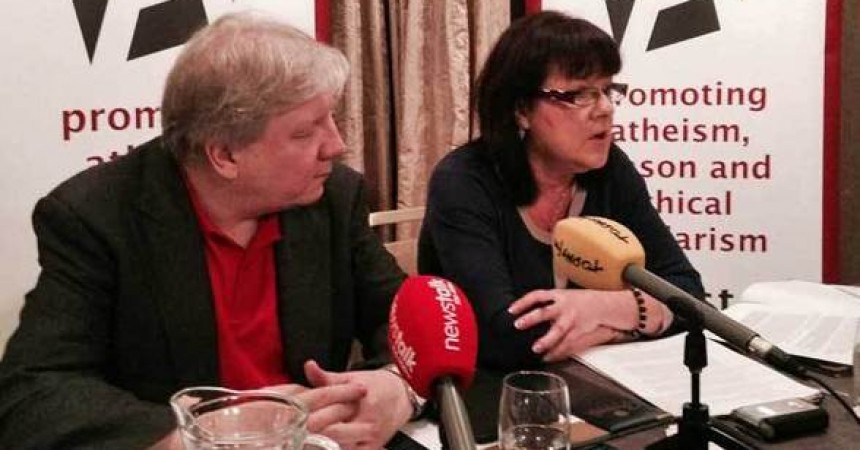 Atheist Ireland today joined the Coalition to Repeal the Eighth Amendment, to enable the Irish Government to legislate for abortion consistently with the human rights of pregnant women.

Other members of the Coalition are:

In January 2013, Michael Nugent and Jane Donnelly were witnesses at the Irish parliamentary hearings on abortion law, along with representatives of six Irish religions. Here is Michael’s opening contribution to the session.

This is Michael and Jane responding to questions at the parliamentary hearings. Also, contribution from Senator Ivana Bacik, who is also a member of Atheist Ireland.

This is a transcript of our contribution to the parliamentary hearings.

We are here because the 1983 amendment has constrained our public ethics.

We should not need three days of parliamentary hearings to discuss how the law should allow a doctor in a hospital to save the life of a dying woman.

That is the absolute minimum rock-bottom ethical standard that we should automatically expect from our healthcare system.

The ABC case requires you to vindicate this right. It does not require you to limit yourself to only doing this.

Please do not ignore the suffering of pregnant women whose health is at risk, who are victims of rape or incest, or whose foetus has fatal abnormalities.

Please recommend removing the 1983 amendment, so that you can democratically decide on appropriate laws for the people of Ireland today.

As atheists, we ask that you respect our human right to freedom of conscience.

As atheists, we each form our own individual ethical beliefs, including on abortion, but one belief does unite us: we do not get our morality from gods.

And so our laws should not be based on what other people believe that the creator of the universe is telling them to impose on us.

For example, Cardinal Brady has explicitly told you that, while acting as our legislators, you should remember that the right to life is conferred on us by ‘the creator’.

Please think about the enormity of that claim, the lack of evidence to support it, and its irrelevance to your deliberations and duties as lawmakers.

Because even if you believe that there is a creator, as many of you do, there is no pathway from believing this to taking any particular ethical position.

You cannot argue that the universe had a beginning, therefore it must have had a creator, therefore you cannot legislate for abortion.

There is no cause and effect between these ideas.

We do not get our morality from religion, we apply our natural morality to religion.

So what is Atheist Ireland asking you to do?

Whatever laws you pass, please base them on human rights and compassion, and on applying reason to empirical evidence, and not on religious doctrines.

Please respect that individual ethical decisions should be made on the basis of personal autonomy and individual conscience, while not infringing on the rights of others.

Please respect that individual ethical decisions about pregnancy should be made by a pregnant woman in consultation with her medical team.

In X, the Court said that the risk to life must be be ‘real and substantial’ but it need not be ‘inevitable or immediate’.

In ABC, the Court said that that obtaining an abortion abroad constitutes a significant psychological burden on pregnant women.

In D, the Irish Government said that it is an open question as to whether a pregnant woman with a fatal foetal abnormality has a right to an abortion.

Ireland is obliged, under various international conventions, to respect the equal right of women to health and to physical and psychological integrity.

The 1983 amendment is incompatible with our human rights obligations, and it discriminates against women on the grounds of physical and mental health.

Finally, the X case has already ruled that a suicidal woman has a right to an abortion in Ireland. You have a duty to legislate for that right.

Please don’t pass a restrictive law that assumes that pregnant women are lying, or you run the risk of another tragedy.

A suicidal woman may be denied an abortion, she may commit suicide, there may be public outrage, and the law may be changed. But it would be too late for that woman.

It took a raped teenage child to establish the right to an abortion in Ireland. It has taken the death of a miscarrying woman to bring about these hearings.

Please stop this unethical pattern of lawmaking by response to personal tragedies.

Please do not limit yourselves to the minimal possible response to X and ABCD and the Expert Group.

Please legislate comprehensively based on human rights and compassion.

Establish a secular State healthcare system where decisions are based on compassion, human rights and the medical needs of patients, and not on religious ethics.

Ensure that no religious values or activities or environments are imposed on patients who do not share those religious beliefs.

Remove the traditional privileges that religious bodies have in healthcare service provision and decision-making.

This is the hugely significant exchange in Geneva in July, where Atheist Ireland attended to brief the UN Human Rights Committee, along with other advocacy groups, before the UN Committee questioned Ireland.

During this exchange, the Irish Government formally accepted that the will of the Irish people as expressed in a referendum or parliamentary vote cannot be used to deny human rights, including on abortion. Of course it has not vindicated this back at home.

The UN Human Rights Committee asked Ireland why it was in breach of the human right of pregnant women to an abortion in wider circumstances than allowed by Irish law.

The Irish State replied that Irish abortion law reflects the will of the Irish people, as allowed under Article 25 of the International Covenant on Civil and Political Rights.

The UN Human Rights Committee said that that was a completely unacceptable reason for denying human rights, and that the very core of human rights law is a safeguard against the tyranny of the majority.

After a break in the session, the Irish Justice Minister Frances FitzGerald formally withdrew the remark and accepted that “the majority will does not and can not derogate from human rights obligations.”

Article 25 of the ICCPR

Every citizen shall have the right and the opportunity, without any of the distinctions mentioned in article 2 and without unreasonable restrictions: (a) To take part in the conduct of public affairs, directly or through freely chosen representatives;

And I call on the State Party to consider withdrawing that statement, on the ability of the Irish State to deviate from the Covenant at will, and to come up with some other explanations for why their laws and practices on abortion are compatible with the Covenant.

This morning I will ask some questions on issues 22 and 24.

But before I address issues 22 and 24, I would like to join my colleague Mr Shany in pointing out that human rights cannot be denied by a majority vote in the Parliament.

Arguments to justify a deviation from the protection of human rights under the Covenant by invoking article 25 of the Covenant cannot be accepted.

I would like to raise some follow-up questions on the very important issue of abortion. Let me first of all state that I share very much the concern expressed by my colleagues Mr Shany and Mr Iwasawa, of the reference by the Delegation to Article 25.

There is no disagreement that a full and free discussion is crucial in any society, and that it is the cornerstone of any democratic and free society, as reflected also in our General Comment number 34 in which our former Irish member played such an important role, Michael Flaherty.

As has been said, such an argument would indeed undermine the essence of the human rights framework both domestically and internationally.

On question 12, I would want to begin my comments in relation to this by referring to the comments of Mr Shany, Mr Iwasawa and Mr Flinterman. And I want to make it absolutely clear that the Government of Ireland recognises entirely the points made by the members of the Committee in relation to Article 25, that the majority will does not and can not derogate from human rights obligations, and I hope that’s a very clear statement of our position.

I am very pleased to hear the Minister’s unambiguous statement on Article 25 of the Covenant, and I appreciate the Delegation’s immediate response to our concern in this regard.