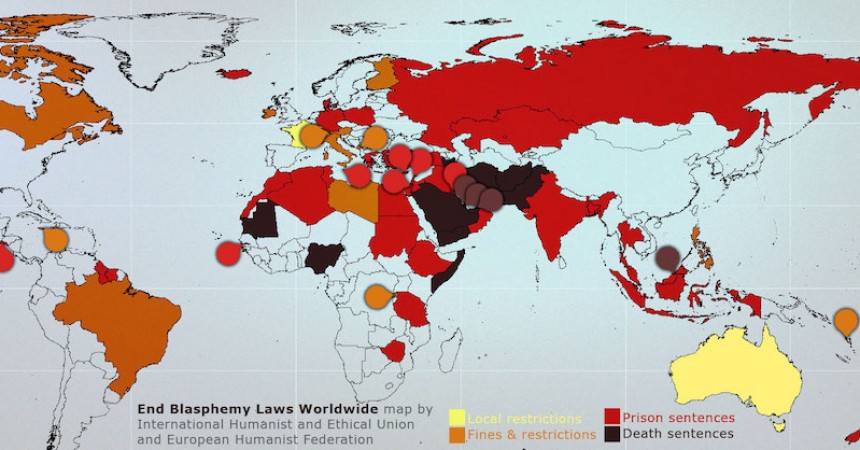 After considerable work behind the scenes in recent weeks, a new International Coalition Against Blasphemy Laws is launched today.

It includes the most comprehensive available country data and profiles adapted from the most recent IHEU Freedom of Thought Report.

The new Coalition is a merger between two concurrent campaigns,

When we each realised that both campaigns were to be launched at around the same time, we were delighted to decide to work together in a single campaign to maximise the impact of the work that we are all doing.

There are also two supporting coalition partners, in countries that do not have blasphemy laws. These are the British Humanist Association and the Centre for Inquiry USA. These will support the campaign operationally, or through international lobbying.

Join our Action List! Fill out the form here to keep in touch with End Blasphemy Laws and find out how you can help. This is a new campaign, but we hope that with your support we’ll be able to send out mass campaign actions, keep you informed about freedom of expression around the world, and find volunteers for special projects.

Firstly, Ireland is the only Western democracy to pass a new blasphemy law in the 21st century. It was passed in 2009, because our 1937 Constitution includes a clause making blasphemy an offence, and the previous 1961 blasphemy law had been found to be unenforceable in the only case that was taken using it.

Professor Heiner Bielefeldt, United Nations Special Rapporteur on Freedom of Religion, advised Atheist Ireland as part of our campaign against this law:

“Of course you are right that the major damage done by this legislation is the international one. I wouldn’t expect any harsh verdicts being handed down in Ireland, but those countries that continue to have an intimidating anti-blasphemy practice like to quote European countries to unmask Western hypocrisy. So I hope things will be moving in the right direction.”

Thirdly, last October, the Irish government decided that a referendum should be held on removing the offence of blasphemy from the Irish Constitution and that your Justice Minister Frances Fitzgerald would lead consultations on a bill to be put before the Oireachtas.

However, the Government has since decided that it will not hold this referendum within the lifetime of the current Government, despite a Constitutional Convention voting for it to do so, and the UN Human Rights Committee telling Ireland that it is breaching human rights.