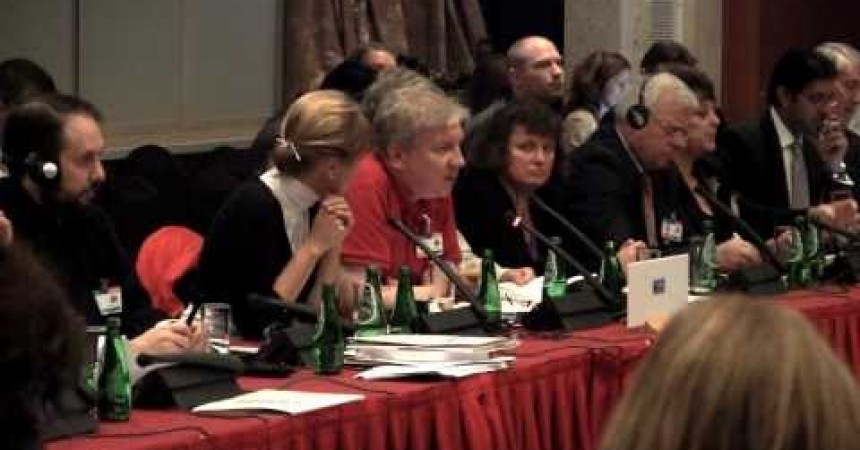 Atheist Ireland’s recommendations to the OSCE human rights meeting in Warsaw last month are now available here on the OSCE website, along with the following documents:

Here are our recommendations for the OSCE (Organisation for Security and Cooperation in Europe), the ODIHR (Office for Democratic Institutions and Human Rights), the Irish State, and other OSCE States and Non-Governmental Organisations.

2. OSCE/ODIHR to reinforce to Ireland, and Ireland to urgently implement, the following concluding observations of the United Nations Human Rights Committee from its examination in July 2014 of Ireland’s breaches of human rights of atheists and minority faiths under the ICCPR:

2(a) Education System
The Human Rights Committee is concerned about the slow progress in increasing access to secular education through the establishment of non-denominational schools, divestment of the patronage of schools and the phasing out of integrated religious curricula in schools accommodating minority faith or non-faith children. It said Ireland should introduce legislation to prohibit discrimination in access to schools on the grounds of religion, belief or other status, and ensure that there are diverse school types and curriculum options available throughout the State party to meet the needs of minority faith or non-faith children.

2(c) Religious Oaths
The Human Rights Committee is concerned at the slow pace of progress in amending the Constitutional provisions that oblige individuals wishing to take up senior public office positions such as President, members of the Council of State and members of the judiciary to take religious oaths.
It said that Ireland should amend articles 12, 31 and 34 of the Constitution that require religious oaths to take up senior public office positions, taking into account the Committee’s general comment No. 22 (1993) concerning the right not to be compelled to reveal one’s thoughts or adherence to a religion or belief in public.

2(d) Blasphemy Law
The Human Rights Committee is concerned that that blasphemy continues to be an offence under article 40.6.1(i) of the Constitution and section 36 of the Defamation Act 2009 (art. 19). It said Ireland should consider removing the prohibition of blasphemy from the Constitution as recommended by the Constitutional Convention, and taking into account the Committee’s general comment No. 34 (2011) concerning the incompatibility of blasphemy laws with the Covenant, except in the specific circumstances envisaged in article 20, paragraph 2 of the Covenant.

2(e) Abortion
The United Nations Human Rights Committee told Ireland that it should: Revise its legislation on abortion, including its Constitution, to provide for additional exceptions in cases of rape, incest, serious risks to the health of the mother, or fatal foetal abnormality; Swiftly adopt the Guidance Document to clarify what constitutes a “real and substantive risk” to the life of the pregnant woman; and Consider making more information on crisis pregnancy options available through a variety of channels, and ensure that healthcare providers who provide information on safe abortion services abroad are not subject to criminal sanctions.

2(f) Majority Votes
During the UNHRC session, Ireland said the reason that it denies pregnant women their abortion rights under the Covenant was because they are expressing the will of the people as expressed through referendum.
The UN Human Rights Committee told Ireland that this reason was totally unacceptable. It said that human rights cannot be denied by a majority vote in Parliament, and that the whole point of international human rights law is to avoid the tyranny of the majority. The Committee invited Ireland to withdraw that as a reason for not fulfilling its Convention duties, and Justice Minister Frances Fitzgerald did withdraw it.

3. OSCE/ODIHR and all states and NGOs to support the attached recommendations in the Dublin Declarations on Secularism and Religion and Public Life, and on Secularism Empowering Women, put together by atheist advocates internationally.

4. OSCE/ODIHR and Ireland to Support the attached recommendations on specific steps needed to achieve secularism, civil rights and empowering women in Ireland.

5. OSCE/ODIHR and all states to treat the Vatican/Holy See/Catholic Church as an NGO religion, and not as a state, and the Holy See to choose not to undermine civic democracy by telling politicians to follow religious ethics instead of legislating for all citizens.

6. OSCE/ODIHR and Ireland to support atheists having the same legal recognition given to religions in Ireland. The Constitution prevents only discrimination between religions, not between religions and nonreligious philosophical groups.

7. Ireland to amend the Civil Registration Act to treat religious and atheist groups equally, and to remove the effective State monopoly that the Act now provides for private entrepreneurs to sell secular ceremonies for profit after being nominated as solemnises by the Humanist Association of Ireland.

The Atheist Ireland AGM is on Saturday. Here’s a review of our political work and breakthroughs during the past year