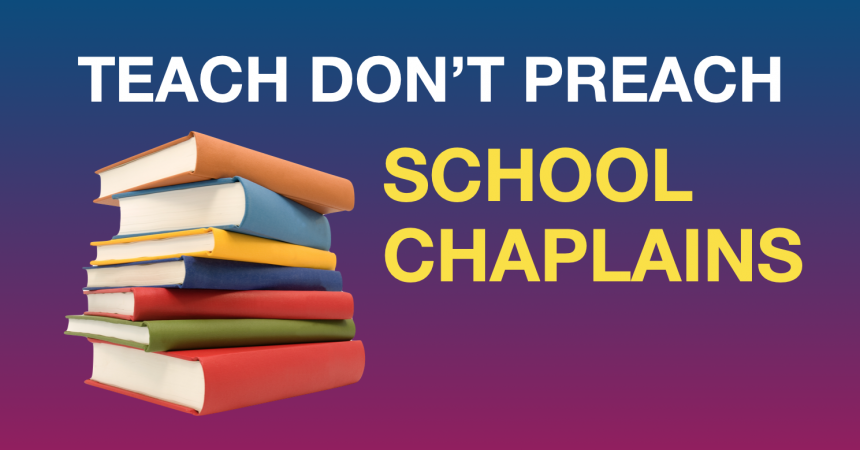 Ireland funds School Chaplains and it costs the taxpayer 9 million a year. This funding is meant to help parents with the religious education of their children in the general school environment of some publicly funded second level schools.

The 9 million is allocated to Chaplains in Community schools and designated Community Colleges and they are paid the equivalent of a teachers’ salary. The state also funds the training of religious instruction teachers.

“In a recent High Court judgement – Campaign to Separate Church and State v the Minister for Education (1996) – Costello P has ruled that community schools set up under this model can be regarded as (a) denominational schools and (b) Catholic community schools ‘in that the religious worship and religious instruction it provides are those of the Roman Catholic Church’. He has also ruled that it is constitutional for the State to pay the salaries of chaplains in such schools.”

Prof Gerry Whyte stated to a conference hosted by the IHRC on Religion and Education that:-

‘the present system whereby the salaries of chaplains in community schools are paid by the State is merely a manifestation, under modern conditions, of principles which are recognised and approved by Articles 44 and 42 of the Constitution.’ (Pp358, 101)

Barrington J concluded his judgment by adding two caveats to his decision. First, the system of salaried chaplains had to be available to all community schools of whatever denomination on an equal basis in accordance with their needs and, second, it was constitutionally impermissible for a chaplain to instruct a child in a religion other than its own without the knowledge and consent of its parents.”

Just to be clear about this, the state funds the training of religion teachers to teach religious instruction classes and it funds Chaplains to help parents with the religious education of their children in the general school environment of public funded schools. It also funds a state religious education course at second level which is an exam subject. This course is not objective and disrespects the non-religious interpretation of life.

The obligation to fund Chaplains is written into the Deeds of Trust for Community schools and the Model Agreement for designated Community Colleges:-

“(x) The Committee will appoint a Chaplain nominated by the competent Religious Authority who shall be employed outside the normal quota of the school. He shall be a full-time member of the staff and shall be paid a salary equivalent to that of a teacher in the school.”

These schools are mainly Catholic which means that the Chaplains are only appointed with the agreement of the Catholic Church. They are Catholic Chaplains who are paid by all taxpayers to promote religious education in the general environment of the school, they are not trained counsellors even though some people like to claim that they fulfil this role as well. A recently published report has found that Religious Counselling Increases Suicidal Ideation Among LGB People – See more at: http://www.skepticink.com/humanisticas/2014/07/05/religious-counselling-increases-suicidal-ideation-among-lgb-people/

The taxpayer does not fund

It is impossible to set up a non-denominational school in this country. Parents that opt their children out of religion classes in schools are responsible for their supervision as the state does not fund supervision. Neither does the state fund another course for children that are opted out of religion classes and consequently all that school time is just wasted. The Supreme Court has recognised that the religious education in the general environment of the school can influence children to some degree if they choose to attend the school.  The problem for most secular parents and religious minorities is that they don’t have a choice where they send their children to school at either primary or second level. All schools at second level are either denominational or multi-denominational.

“If Barrington J’s judgment suggests that a child of a minority religion, or from a non faith background, with no choice but to attend a Roman Catholic school other than withdrawing from formal religion classes, must in effect accept a form of religious education which offends their convictions, then this would appear to elevate one form of parental choice over another, with the majority  religion always dictating the outcome. This could hardly respect the rights conferred on all parents by virtue of Article 42 of the Constitution.” (page 73)

At this stage it should be clear that Ireland has an institutionalised belief system despite the fact that we hear certain religious bodies complaining about how they are being marginalised and pushed out of the public square, they like to blame secularism for this.

The state privileges a certain type of religious belief system while secular parents must endure the disrespect of this Republic for their philosophical convictions. This Republic does not recognise that secular parents have the same inalienable rights as religious parents under Article 42.1 of our Constitution. In this Republic we are not all equal before the law without discrimination.

The taxpayer is funding Chaplains (mainly Catholic) to help parents with the religious education of their children when some of these same parents never see the inside of a church from one end of the year to the next, they don’t believe in transubstantiation and support marriage equality. Most religious minorities don’t benefit from this system as getting recognition for a school depends on a majority of parents in a particular area. It is the Catholic Church that benefits from this system and it has meant that they get state privilege to promote their particular version of Christianity.

Needless to say this is simply not compatible with human rights law and even a cursory glance will tell you that this behaviour is a breach of the right to freedom of conscience, religion and belief. Our standards are pretty low in this Republic when it comes to protecting the rights of minorities. This is religious discrimination and a breach of the right to freedom of religion and to say otherwise is simply burying your head in the sand. Under human rights law secularism is regarded as a philosophical conviction, protected by Article 9 of the European Convention and Article 18 of the International Covenant on Civil & Political Rights. Secular parents have the exact same rights as religious parents when it comes to the education of their children.

Last July the UN Human Rights Committee questioned the state about the human rights of minorities in Irish schools, they asked in particular about the right to a neutral studying environment in schools. Minorities in multi-denominational and denominational schools in Ireland have not got access to a neutral studying environment. To date the government has not responded.

We are looking forward to hearing the government of this Republic explain how it is necessary and proportionate to deny minorities their human rights in order to uphold the institutionalised belief system that it continues to support and fund.