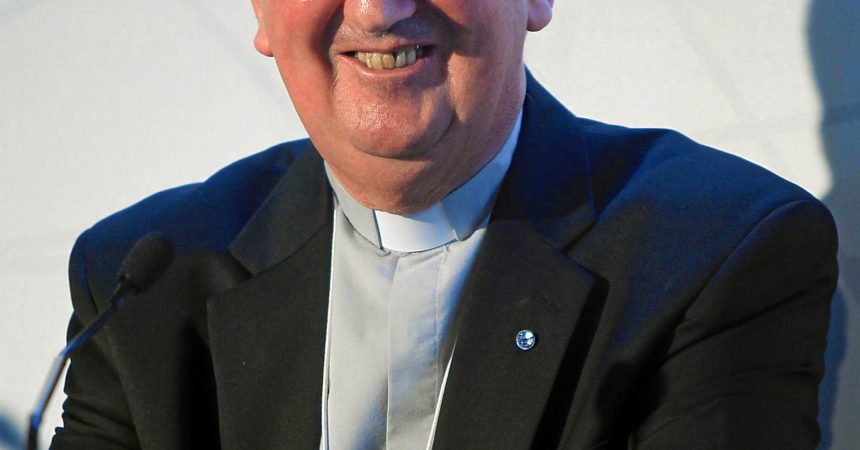 In a speech yesterday the Archbishop of Dublin Diarmuid Martin said that pluralism is something we should welcome. He said that,  “The Catholic children of the Ireland of the future will live in a climate of pluralism and must learn not to fear pluralism but to be able proudly and confidently to live their faith in a pluralist culture, a faith which hopefully will be nourished to maturity in the Catholic school.  Young Christians need strong roots in their faith in order to flourish in a pluralist society.”

Can. 793 §1. Parents and those who take their place are bound by the obligation and possess the right of educating their offspring. Catholic parents also have the duty and right of choosing those means and institutions through which they can provide more suitably for the Catholic education of their children, according to local circumstances.

§2. Parents also have the right to that assistance, to be furnished by civil society, which they need to secure the Catholic education of their children.

The Catholic Church also believes that the state should fund various other schools so that all parents, no matter what faith, can educate their children in publicly funded faith schools. When you hear the Catholic Church talking about the rights of parents, and their right to choose an education for their children, this is what they are talking about. In essence this is what choice and plurality of patronage means on the ground: it means enforced religious segregation of children.

You often hear politicians talking about plurality of patronage, all based on choice of course. In reality they are speaking about a system of apartheid where every morning young children from the same community get up and go to different schools, because the religious majority in the country has a duty under Canon law to send their children to Catholic schools.  What we are being told is that in order to “proudly and confidently to live their faith in a pluralist culture”, five year old children should be segregated on the basis of their parents religion. If this system of apartheid was based on race we would accept instinctively that it is wrong.

Of course politicians realise that they could not possibly fund such a system, so the choice then becomes limited for minorities. It is Catholic schools for the children of Catholic parents, and the rest of you can attend Educate Together schools, if available. They will throw in a few minority religious schools as well but in the main this system supports the religious majority even if they are not committed to their faith.   It has become a game of numbers where the so called religious majority in a particular area get state funding to open a school and minorities have no choice but to attend these schools as the area simply cannot support two or more schools schools under different patronage.

Despite the grip they have had on our education system the Catholic Church in Ireland know the game is up and that no state can and could ever agree to fund different faith schools throughout the country. The next best thing is to claim that their schools are inclusive and that Catholic schools cater for all religions and outlooks. We would love to hear how Catholic education caters on the ground for secularists.

Catholic schools have no problem with requiring parents to furnish a baptismal certificate in order to gain access, but don’t let that get in the way of calling Catholic schools inclusive. It is beyond comprehension how anybody can call schools that discriminate on entry inclusive, but this is Ireland where religious discrimination is now called ‘over subscription criteria’.  We cannot accurately say that publicly funded National schools with a Catholic ethos practice religious discrimination, as then they wouldn’t be able to call themselves inclusive.

Catholic education is all about segregation and discrimination. In state schools they believe children should be segregated on religious grounds and they want religion integrated into the state curriculum. Even if children were educated in the same school organising different religion classes for the variety of beliefs in the country is simply not possible on the ground and of course we would still be segregating children on the grounds of religion. No state could guarantee a religious education for every family in the country; it is simply not possible to achieve this on the ground.

Secular education forbids religious discrimination, it guarantees respect for all parents’ convictions be they religious or philosophical throughout the entire education system. It promotes pluralism and diversity and cements social cohesion by ensuring that all children are educated together. No child would ever be refused access to a secular school because they could not produce a Catholic baptismal certificate. No child would be forced to attend religion classes or religious ceremony because there was no supervision for those who wished to opt out. No child would ever be made to feel different and excluded because their parents did not get them baptised. Secular education is inclusive because it respects ALL parents religious and philosophical convictions equally as it excludes any discretion on behalf of the state to determine whether religious beliefs or the means used to express such beliefs are legitimate.

Article 42.3.2 of the Irish Constitution obliges the state to ensure that all children receive a basic moral education. It is parents under Article 42.1 of the Constitution who are responsible for the religious education of their children not the state.

“The State shall, however, as guardian of the common good, require in view of actual conditions that the children receive a certain minimum education, moral, intellectual and social.”

As it stands now some children get no ethical or moral education in schools because the state disrespects the rights of some parents by not remaining neutral and impartial and by supporting religious discrimination. It is difficult to understand how this system cannot be described as an endowment of religion forbidden under Article 44.2.2 as this religious discrimination undermines the Constitutional and Human Rights of minorities and has resulted in the Catholic church running approx 3000 schools out of 3200.

In a recent case at the European Court of Human Rights the court again reiterated the duty of the state to remain neutral and impartial.

“Finally, in this connection, the Court recalls that, but for very exceptional cases, the right to freedom of religion as guaranteed under the Convention excludes any discretion on the part of the State to determine whether religious beliefs or the means used to express such beliefs are legitimate (Hasan and Chaush v. Bulgaria [GC], no. 30985/96, § 78, ECHR 2000-XI). The State therefore has a duty to remain neutral and impartial in exercising its regulatory power in the sphere of religious freedom and in its relations with different religions, denominations and beliefs”……..” The Court considers that the obligation under Article 9 incumbent on the State’s authorities to remain neutral in the exercise of their powers in the religious domain, and the requirement under Article 14 not to discriminate on grounds of religion..”.  (Case of the Church of Jesus Christ of Latter Day Saints v The United Kingdom, 4th March 2014)