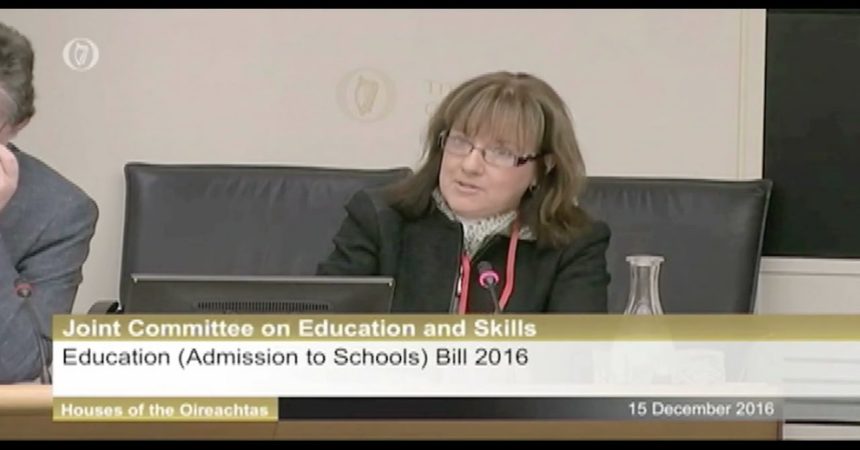 Jane Donnelly, Atheist Ireland’s Human Rights Officer, made the following presentation today to the Oireachtas Joint Committee on Education and Social Protection. The Committee was discussing the Draft General Scheme of an Education (Admission to Schools) Bill 2013.

As legislators, what would you do if I was sick, and my local State-funded hospital told me that they might be able to treat me, but only after they first treated all sick Catholics?

What would you do if I was burgled, and my local police station told me that they might be able to help me, but only after they first dealt with all Catholic crime victims?

What would you do if any State-funded service had two separate queues, one to deal with Catholics first, and another to maybe deal with the rest of us later?

Would you tell me that is okay, because a majority of people in my local area are Catholics, and that is what the local majority wants?

Would you tell me that I have a choice to either move elsewhere, or to set up my own hospital or my own police service?

Would you tell me that the State has decided to pay Catholics to run these State-funded services according to their own Catholic ethos?

No, you would not. As legislators, you would tell me that you will defend my human rights to freedom of conscience, freedom from discrimination, equality before the law, and private and family life.

I know that, because the State has already signed various international human rights treaties in which you have already guaranteed me those human rights.

And yet, when it comes to State-funded education, you force me and my children to leave our human rights outside the school gate.

You allow my only local State-funded school to tell me that they admit all Catholic pupils first, and that they might then get around to my children, if there are any extra places available and only if we don’t undermine their ethos.

That breaches my human rights to freedom of conscience, freedom from discrimination, equality before the law, private and family life, and the rights of the child.

It is not acceptable in a democratic Republic, where all citizens should be treated equally.

Now imagine that my local State-funded hospital, or police force or other public service, not only helps all Catholics before maybe getting around to me, but also actively promotes Catholic faith formation while helping me?

What would you tell me then?

Would you tell me, like you are now telling me about our State-funded schools, that I can just opt out of the Catholic faith formation?

A positive obligation means that the State must actively do something. It is not just a negative right of permitting us to opt our children out from religious instruction classes. Just opting out will not fulfill the State’s obligations under human rights law.

This right to respect is legally an absolute right, not one to be balanced against the rights of others, or the ethos of the school, or to be gradually achieved.

Finally, even if opting out was enough – which it isn’t – we can’t even opt out anyway in practice. Because nearly all State-funded schools integrate their religious ethos into all subjects of the State curriculum.

The State is legally obliged to protect secular families from this religious integrated curriculum, because it is not delivered in an objective, critical and pluralistic manner.

Just last month the UN Human Rights Committee has asked Ireland what we are doing to protect these human rights, and what progress we are making in setting up nondenominational schools around the country.

As legislators, you wouldn’t allow our hospitals or police force or any other public service, to help Catholics before dealing with anyone else, or to actively promote Catholic faith formation to nonreligious citizens, or to integrate that ethos into all of their work.

So why are you doing it with our State-funded schools? Why are you forcing me and my children to leave our human rights outside the school gate?

Atheist Ireland’s written submission describes exactly how these issues breach human rights law, and what changes are needed to protect our human rights, including changing Section 7.3(c) of the Equal Status Act.

Please don’t use this committee to just fine-tune our ‘separate but equal’ laws for our State-funded schools, that pretend to be inclusive but that have an admission policy based on discrimination and segregation.

Please pass laws that treat all children of the nation equally, regardless of the beliefs of their parents about religion or atheism.

Please protect equally all of our human rights to freedom of conscience, freedom from discrimination, equality before the law, private and family life, and the rights of the child.

I am now happy to answer any of your questions.