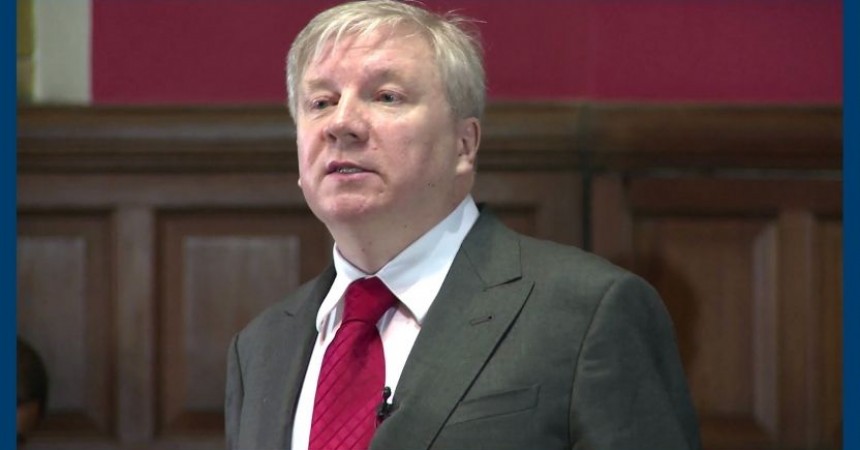 This is video and script of Michael Nugent’s speech at the Oxford Union debate on 7 November, where he proposed the motion That Religion Harms Society.

In the 1970s the IRA used condoms as part of the internal mechanisms of their bombs, and some IRA members were opposed to using condoms on moral grounds.

Today in Belfast, the Health Minister is a Young Earth Creationist who rejects evolution. The High Court has just found him to be irrational for banning gay men from giving blood.

Today in Rome, the Vatican still protects priests who have raped children. And Irish State Tribunals have found that Catholic Bishops have positively lied and deliberately misled.

Today in Pakistan, Asia Bibi, a Christian mother, faces execution by hanging for allegedly blaspheming against Muhammad. And two politicians who defended her have been murdered – one by his own bodyguard.

Today in Wisconsin, two parents have been jailed for reckless homicide, because they prayed over their dying child instead of calling an ambulance.

It encourages us to believe implausible and untestable assertions on faith, by which I mean believing things because we want to believe them, disproportionately to the evidence.

But before I get into that, I have some good news for all of you. I spoke today with Bill Gates of Microsoft, and he is going to give each of you ten million dollars if you vote with me on this motion. Now, none of you believe that is true. You know that I am making it up.

But if I told you instead that I have some good news for all of you, that I spoke today with the creator of the universe, and that he will give each of you an eternity in paradise if you do what I say … Well, some of you here might believe me. Certainly, many people around the world would believe me.

That is because because religion corrupts our sense of reality.

We normally believe that claims are true or false by assessing the available evidence. And as claims become increasingly implausible, we proportionately raise the bar of the evidence that we require.

But with religion, we do the opposite. As the claims become increasingly implausible, we instead lower the bar of the evidence that we require.

Compare this with secular faiths that cause harm, such as faith in fascism, communism or the unregulated free market. Eventually these faiths bump into reality, and we realise they are not working. But religious faith hides its testability in an imaginary afterlife.

Morality is a natural function of our brains. It has evolved in the brains of social animals, including humans, because both cooperation and competition help us to survive.

In recent generations, we have refined our sense of morality. We increasingly respect individual conscience, personal rights, and the rights of non-human animals.

It is already hard enough to find the best balance between the requirements compassion, empathy, suffering, wellbeing, cooperation, reciprocity, fairness and justice.

But religion corrupts this already-difficult process by adding in invented supernatural commands that are unrelated to compassion, suffering or justice.

And religion insists that our natural morality is trumped by what some people believe that the creator of the universe is telling them to enforce on the rest of us.

And so many Catholics justify denying condoms to AIDS victims in Africa. And many Muslims justify the claim in the Quran that husbands can beat their wives.

And last year, when an Irish hospital denied an abortion requested by Savita Halappanavar, whose fetus had no chance of survival, and who ended up dying herself, her husband was told in the hospital that Ireland is a Catholic country.

Not only is religion not needed for morality, but religion actively corrupts morality.

Finally, please keep your focus on the motion.

Don’t be distracted by claims that secular ideologies can also do bad. That is true, and it is also true that religion harms society.

However implausible the idea may be that I spoke to Bill Gates today, it is surely even more implausible that a supreme being created a universe of a thousand billion galaxies, each of which contains a thousand billion stars like our sun, so that he could tell one member of one species on one planet to stone a man to death for gathering sticks on the Sabbath, and then impregnate a virgin in order to give birth to himself, and give Muhammad a ride on a flying horse, and appear in Joseph Smith’s hat in order to attire him in magic underwear.

And on the basis of invented and untestable absurdities like this, Asia Bibi is today languishing in a prison cell in Pakistan, waiting to be executed by hanging for allegedly blaspheming against Muhammad.

I propose the motion.