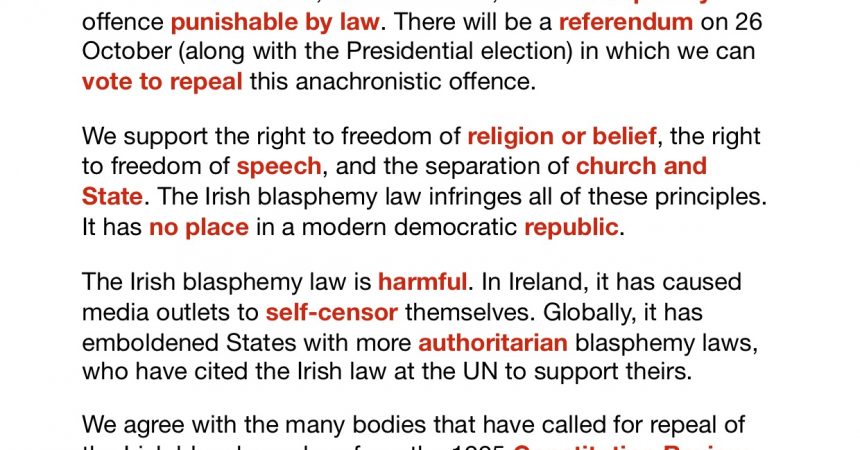 We are pleased that 61% of the Constitutional Convention members have rejected the reference to blasphemy in the Constitution. But we are shocked and concerned by some aspects of the outcome.

We are shocked that 38% of the members voted to keep this anachronistic reminder of the Ireland of Eamon de Valera. We are also shocked that 49% want there to be a law against blasphemy in 21st century Ireland. If these votes reflect Irish society generally, we may be in for a more difficult 1980s-style referendum campaign than we had anticipated.

It shows that we cannot become complacent in the ongoing campaign for pluralism, freedom of conscience, freedom of expression, freedom from discrimination, and ethical secular separation of church and state in Ireland.

It shows that we still have considerable work to do in removing the harmful impact of this clause internationally, where Islamic States have used the Irish blasphemy law at the United Nations to promote blasphemy laws around the world.

We are concerned that 53% of the Convention want to replace the offence in the Constitution with a new general provision to include incitement to religious hatred. 38% wanted to remove it altogether, and 9% were undecided.

Whatever it means, why should we again give undue privilege to religion? If we were to include prohibition of incitement to hatred in our Constitution, why should we discriminate against many victims of other types of hatred by focusing only on religious hatred, as opposed to hatred on the ground of race, colour, nationality, ethnic or national origins, membership of the travelling community or sexual orientation?

The ballot paper did not include the option to replace the clause with a positive clause on freedom of expression based on Article 10 of the European Convention of Human Rights. This option was recommended by Atheist Ireland, and previously by the 1996 Irish Constitution Review Group chaired by TK Whitaker.

We are shocked that 49% of the Convention members want there to be a law against blasphemy in 21st century Ireland, and that 82% believe that, if there should be such a law, it should be a new detailed law including incitement to religious hatred.

Here are two initial responses to this development.