This week has been all about our fifth AGM. I’m glad to report that it was an enjoyable and productive event and that I received a lot of positive feedback about this newsletter. I’m glad it’s being read anyway, and to those who expressed a wish that it would arrive a little earlier on a Sunday, well, maybe next week. 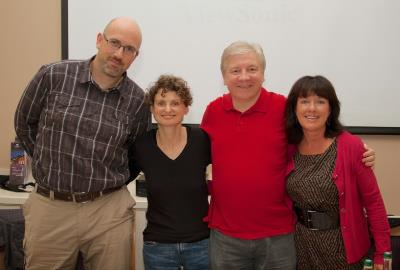 The 2013 Atheist Ireland Annual General Meeting took place yesterday  in the Harbour Hotel in Galway. We discussed our activities since the last AGM, the organisation’s structure and finances and plans for the coming year. Additionally we launched our Declaration on Secularism Empowering Women and announced our plans to develop the first course about atheism for Irish primary schools.
A full report and a number of videos will be available shortly.

Highlights of the Last Year

The above represent just a small sample of our activities over the last year or so. There are far too many to include here. The full report is available here.

There was one nomination for each of our elected positions and the following were returned unopposed:

The current co-opted committee members are:

On 30 June 2013, Atheist Ireland’s international conference in Dublin on Empowering Women Through Secularism discussed and adopted a declaration on Secularism empowering women. It was launched at our AGM. You can read it in full here.

We will be working with Educate Together to develop Ireland’s first ever course about atheism for primary schools. The lessons will be based on the Toledo guiding principles and will be taught in an objective, critical and pluralist manner. They will teach about atheism, not teach atheism. Read more

Our guest speaker for the afternoon session was Séamus Murnane, who set up the original atheist.ie website, which led to the founding of Atheist Ireland. Séamus spoke about the early days of the website and his personal journey to atheism. In recognition of the instrumental role he played in the early days of Atheist Ireland and because he is now emigrating, Seamus was presented with a harmonica by Michael Nugent (not just a random gift, Séamus is a keen harmonica player and founder of HarmonicaClub.com).

Most of the committee and a number of other Atheist Ireland members went for dinner in a local restaurant following the AGM. Any resemblance to any religious artworks is purely non-coincidental.

All events are free and open to everyone unless otherwise stated.

Secular Sunday #279 ‘join our campaign to separate Church and State’