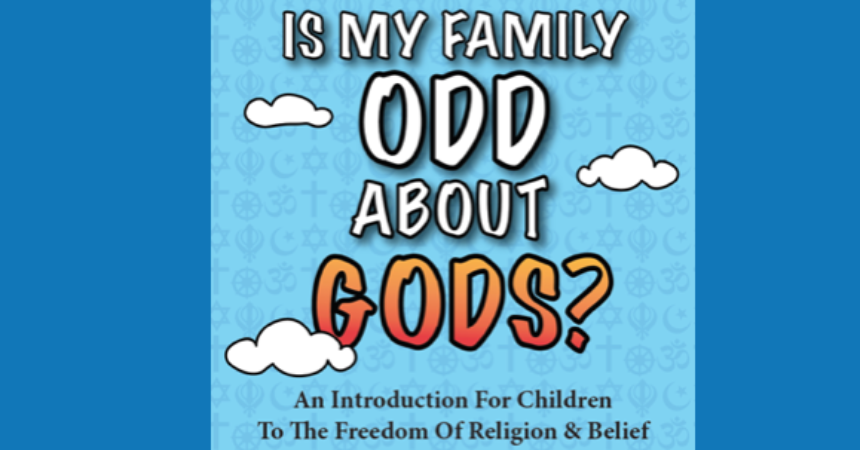 Atheist Ireland will launch two important initiatives at our AGM today, Saturday 21 September, in the Harbour Hotel in Galway, from 10 am to 5 pm.

UPDATE: Atheist Ireland is also financing, developing, designing and piloting Ireland’s first ever children’s books and primary school course about atheism. We’ve had great feedback so far to the first phase of the project: a book for children about freedom of religion and belief, titled Is My Family Odd About Gods?

We were initially working with Educate Together on this project, with information provided by us and developed into lessons by them. As we reported at our 2014 AGM, the nature and schedule of this project then changed, as we turned out to not share the same vision with regard to either costings or content of the project.

Atheist Ireland has since commenced the project by writing, testing, and publishing the children’s book Is My Family Odd About Gods? The book, with illustrations by Eiynah, is already in some school libraries, and being used in some classes, in both Educate Together and denominational schools.

You can buy the book online in either print or digital format – see the link near the top right of this page.

We are now working on translating the content of that book, as well as other content, into workbooks with projects, and initial lesson plans. Parents are currently reviewing the first set of draft lesson plans. We are grateful for the support, both financial and otherwise, of everyone who has donated to this project.

Why is this book and course so important?

The Irish State discriminates against secular parents and their children. They take no positive steps to protect secular parents and their children from religious discrimination in the education system. There are no secular, non-denominational public schools in Ireland. Only a small but growing number of Educate Together schools provide education about religion without faith formation, and even they have no course content about atheism.

The Irish education system is funded by the Irish state, but the state effectively franchises the running of schools to private bodies called patrons. The patrons employ teachers and set the ethos of the school, and the state funds the maintenance of the schools and pays the teachers’ wages. Over 90 per cent of patrons are Roman Catholic Bishops. Most of the rest are clerics from other churches.

Religious schools can legally give preference to co-religionists in order to uphold their religious ethos. Parents are required to produce a Catholic Baptismal Certificate when enrolling their children at the only local school. Schools can also legally dismiss a teacher if they do not uphold the religious ethos of the school. This religious discrimination is not confined to the school environment but also involves the private life of the teacher.

Catholic Schools in Ireland operate a religious integrated curriculum. Religion is integrated into the curriculum and the daily life of the school. The UN Human Rights Committee has raised concern regarding the religious integrated curriculum in Irish schools as it denied parents access to a secular education for their children. They said that it was discrimination, and breached the right to freedom of conscience, the rights if the child and the right to equality before the law.