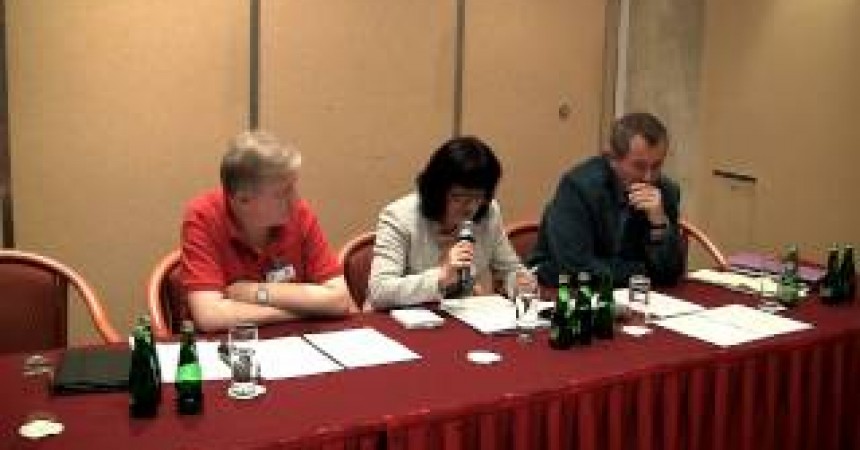 This is the speech by Jane Donnelly, Atheist Ireland Education Policy Officer, to the side meeting on protecting the human rights of atheists, at the annual OSCE (Organization for Security and Cooperation in Europe) human rights meeting in Warsaw in Poland today, Monday 1st October.

Protecting human rights requires that people understand what human rights are, and this is more likely to happen if new generations of young adults have been educated in a secular education system based on human rights law.

A secular human rights based education is inclusive of all religions and beliefs. It is a starting point for children to respect each other and learn about human rights and living in an ethical society. Secular schools can educate for democratic citizenship and human rights. Secular education based on human rights does not discriminate on any ground.

It is important to note that the essence of the human right to education belongs to the child. When we discuss education we are more inclined to speak of the rights of parents in the education of their child. Children have rights and their right to an education must be paramount. Respect for the convictions of parents are only due if they do not conflict with the right of the child to education.

The right to freedom of conscience protects theistic, non-theistic and atheistic beliefs, as well as the right not to profess any religion or belief. This right is not limited in its application to traditional religions or to religions and beliefs. The right to education is closely linked to the right to freedom of conscience. This means that the states are obliged to respect the religious and philosophical convictions of all parents and this includes Atheists.

The OSCE specifically emphasises discrimination against Christians, Muslims and Jews. It should also highlight that human rights law protects Atheists and all minorities and that states are obliged to ensure that the rights of all parents and children are respected in education. We constantly hear it said that there is a right to freedom of religion not freedom from religion. This is because it is not recognised that the right to freedom of conscience protects Atheists. The right to respect for the philosophical convictions of Atheists, Humanists and Secularists in education is an absolute right and not to be balanced against the rights of others.

This is part of the right to education guaranteed under Article II of Protocol 1 of the European Convention and Article 13 of the UN International Covenant on Economic Social and Cultural Rights. It would seem that the best way forward to understand what exactly is secular human rights based education is to understand what is meant by the right to freedom of conscience, religion and belief. Defining this right and the practical application of it in the various school systems is essential in order to protect the rights of all parents and children.

Human Rights guarantees education to all without discrimination in law and in fact.

An example of how an education system discriminates in equality of access is the Irish education system. The majority of schools in Ireland are private religious schools and the Catholic Church controls over 92% of them at primary level. These schools are permitted by legislation to give preference to co-religionists. 98% of primary schools in Ireland are actually publicly funded private religious schools and are exempted from equality legislation.

The non-religious are now the second largest group after Roman Catholics in Ireland and they have equality of access without discrimination to only 2% of schools in the State. The Irish Primary school curriculum does not separate religious and moral formation. Irish schools are exempt from the European Convention on Human Rights Act 2003 as they are not considered ‘organs of the state’. The UN and Council of Europe have called on the Irish state to open up non-denominational schools throughout the State and to ensure that all children have access without discrimination to education. A few months ago under the Universal Periodic Review Ireland refused to remove discrimination in access to education.

Teachers suffer religious discrimination in Ireland under employment equality laws. They are obliged to uphold the religious ethos of schools and this is not confined to the working day. Teachers can be dismissed if their private life is not in accordance with the religious values of the school.
The Ombudsman for Children in Ireland recently issued a report regarding a sixteen year old girl who was refused access to a school twice. The first time she was refused was because she was pregnant and the second time because she was a single mother.

There should be no room for this kind of religious discrimination in any school system or anywhere for that matter. It is difficult to put a measure on how critical it is to ensure that schools are inclusive and welcoming of all children and do not discriminate. Children learn how to relate to each other and society and it is absolutely essential that they do this in an atmosphere where they are respected. Children need to feel a sense of belonging, of being accepted and nurtured. That must include children from all backgrounds and children with special needs. Religious discrimination undermines democracy and pluralism.

Atheist Ireland supports the OSCE Guidelines on teaching about Religion and Beliefs in schools because they are based on human rights. One of the key human rights principles in the delivery of any course on Religion and Beliefs is that it must be delivered in an objective, critical and pluralistic manner. We have found that some religions claim that their teachings are inclusive of all religions and none when they clearly are not delivered in an objective, critical and pluralistic manner.
Religious Education in Irish Schools is not in compliance with the OSCE Toledo Guiding Principles and consequently Ireland’s human rights obligations. Religious Education in most Irish schools is integrated into the curriculum and it is impossible for minorities to opt out of it. The United Nations Human Rights Committee has raised concern regarding the rights of secular parents and their children in Irish schools. The human rights that they are concerned about are:-

In a third party submission to the European Court of Human Rights in the O’Keefe v Ireland case (Application No. 35810/09) the Irish Human Rights Commission have stated that:-
“A serious question arises in the present application as to whether the State has maintained a sufficient level of control over publicly funded national schools to ensure that the rights enshrined under the Convention, namely Articles 3, 8, 13 and Article 2 of Protocol 1, are fully upheld within the education system.” http://www.ihrc.ie/enquiriesandlegal/amicuscuriae/ihrcmakesamicus.html

The European court and the UN consistently emphasise that human rights are not a theoretical illusion. Human rights are meaningless if they do not have a practical application on the ground. It is not possible to promote human rights such as freedom of conscience, religion and belief while at the same time ignoring the rights of some parents and children in our education systems.

Catholic Schools Week is evangelising, not welcoming or inclusive