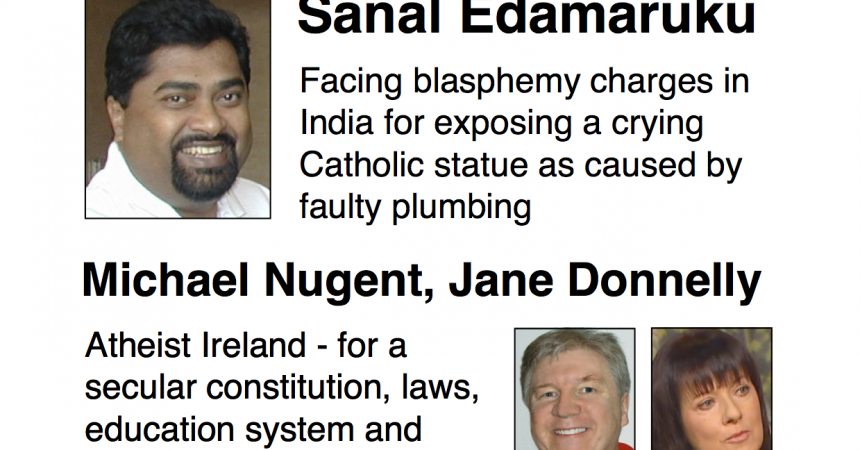 We have an inspiring guest speaker for the public meeting after the 2012 Atheist Ireland AGM on the afternoon of Saturday 20 October in Dublin: Sanal Edamaruku, the President of the Indian Rationalist Association, who is currently facing blasphemy charges in India – based on complaints instigated by the Catholic church – because he exposed a supposedly crying statue of Jesus as being caused by faulty plumbing.

The afternoon meeting will be open to the public, and the morning session will be for members only. We’ll announce the venue soon, but for now please mark the date in your diary.

Sanal is one of many victims of international blasphemy laws who Atheist Ireland is campaigning for. Others include atheist Alexander Aan in Indonesia, Christians Asia Bibi and Rimsha Masih in Pakistan, and Muslim Hamza Kashgari in Saudi Arabia. Islamic states have cited the new Irish blasphemy law at the UN to support their own laws.

In 2008, on an live TV show, Sanal challenged a tantrik to demonstrate his powers on him by killing him using only magic. The tantrik chanted mantras and performed a ceremony which failed to kill Sanal. The tantrik said that Sanal must be under the protection of a powerful god, to which Sanal responded that he is an atheist.

How Religion Harms Education – Talk by Aron Ra next Tuesday, 21 April, at public meeting in Dublin

The panel on promoting secular values in society at EWTS 2013