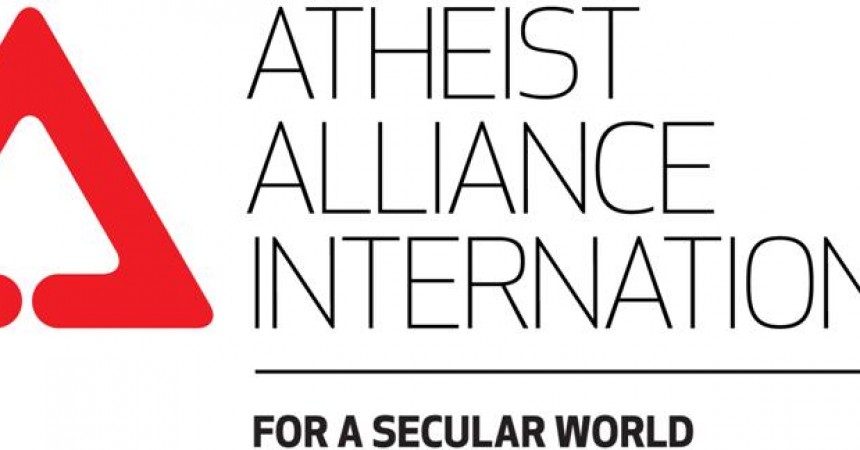 Pouring myself like a mildly solid liquid out of the car I returned yesterday from the tiring but moving Atheist Alliance International Conference in Köln. AAI once again put on a great conference. The organisers picked what normally is a music venue which afforded us with a healthy mix of good acoustics and seating in the conference area and an on site restaurant and beer garden in the sun for in between and after the sessions.

Although from my opinion the talks fed a little bit of red meat to the lions of atheism, maybe a bit too much affirming what atheists already mostly knew or wanted to hear, most of the talks were highly moving and evocative.

Leo Igwe atheist and Humanist spoke about leaving the Seminary his parents had put him. He was seeking time to think and doing so led him to become an atheist and humanist activist. He spoke of the hardships he himself suffered because of this choice as people and governments attacked him directly and indirectly through his family and friends. Even showing up and beating his father at one point so badly that he lost an eye. He spoke of some of the main passions of his mission such as saving children accused of witchcraft who were sold into sexual slavery for their crimes. He spoke angrily about the crimes he witnessed against humanity but always with a touch of his passion for the joy of life, joy of living and joy OF the living for whom he fights so hard. Talking to him myself in the beer garden afterwards I found that despite his long fight and ongoing adversity he still had a laugh so full of life and joy and infectiousness that it could reduce people within 20 metres to laughter even if they had not heard the joke.

Taslima Nasrin spoke of her “life” in Bangladesh… if such an experience could be called a life when you are born into religious chattelhood and considered inferior solely for the crime of being female in a society… before having to flee from there for speaking out on issues of human rights, humanism and feminism. Now living in New Delhi she speaks of her experience as being a woman without a home who wants to campaign for human rights but also wants nothing more than to speak her own language in her own country with her own friends but no longer can do so. Her experiences reflect much of what Salman Rushdie experienced with people putting a price in their own name on her head. While governments watched on condemning the novels instead of those calling for cold blooded murder and violence.

The most moving parts of the conference however did not occur on stage but between sessions as powerful relationships were formed, rekindled and brought together. Nasrin met a Pakistani doctor in the audience whose story of serving 3 years in a Pakistani prison for the imaginary crime of Blasphemy moved her so much that she brought him to the stage at the end of her talk and they shared a moving and tearful embrace on stage as she petitioned AAI organisers to have him tell his tale in a future conference.

Dan Barker a former preacher himself had much to say to Igwe around the beer garden as they compared stories of escaping the industry and making the journey to free thinking. Dan pressed a signed copy of his own book on the subject into Igwe’s hands who spent the rest of the day clutching it protectively as if it were a precious baby. I hope he enjoys it as much as I intend to and I have done something I rarely do and moved Barkers book quite a few slots up my now 200 strong “to read” book list. Normally I refuse to do this as since I am one of those “atheists” who actually does read books by theists rather than just the atheist stuff, if I did allow myself that pleasure I would likely move the atheists book up and the theist ones down and never get to them. So I try to hold true to the order the books appeared on my list when recommended by respectable sources.

The conference overall defied to me the straw man I hear so often from theists about the atheist movement… that we all just sit around talking about no god all the time and quoting our own religious leaders like Dawkins. The exact opposite of this was the case and not only did I fail to hear a single quote or reference to Dawkins or Hitchens…. what I found these people to be were highly motivated, highly compassionate people focused on the well being of fellow humans to the point that each had a life story to tell of hardship and adversity punctuated by love, hope and ideals. Stories that moved one to the certainty that if any of the many people who do want to see the likes of Barker, Myers, Nasrin and Igwe dead were to enter the room at that moment that there would not be the slightest hesitation of stepping between them and ensuring they had to go through you first. And this for no other reason than it is the right thing to do… and not because we are promised some after life of bliss, sexual exploits with multiple virgins, or milk and honey to press to our lips.

Secular Sunday #93 – All Hands On Deck