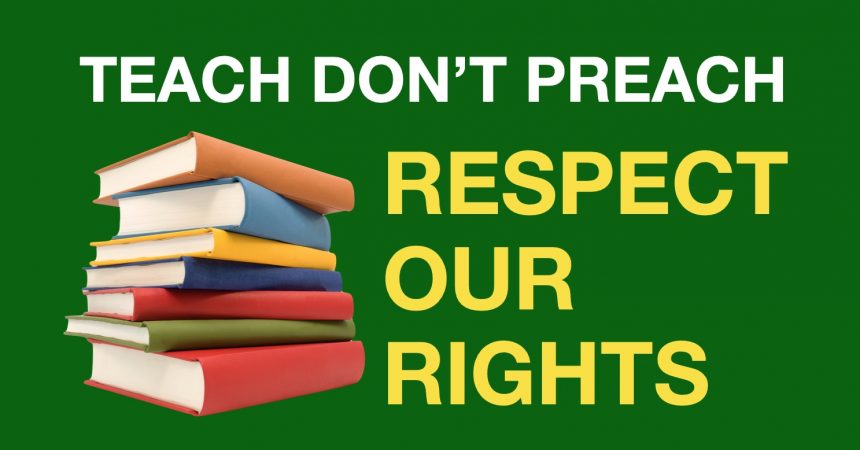 Last Friday, Michael Nugent and Jane Donnelly attended a conference in Limerick titled Towards Mutual Ground: Religious Pluralism in Educational Practice in Irish Schools. It was organised by the Mater Dei Irish Centre for Religious Education, the PDST, and hosts Mary Immaculate College. Catherine O’Brien from the Humanist Association of Ireland was also there, and one of the workshop speakers was Fionnula Ward from Educate Together.

Overall, we found the conference to be very useful, with a lot of information covered, and many people interested in sharing opinions with us both during and between the formal sessions. Unfortunately, we also heard some of the caricatures of atheism and defamatory statements about atheists that we have sadly become used to from some Catholic theologians, including the literally dehumanising claim that atheists are not fully human.

The first keynote address was by Prof Marie Parker-Jenkins from the University of Limerick. She discussed the overlapping identities that both children and adults have in terms of race, culture, religion and other characteristics. In particular, she described research that she had conducted on the expansion of Islamic schools, and the interrelationships between the schools, communities, citizenship and social identity.

The second keynote address was by Prof Gavin D’Costa, a Catholic theologian from the University of Bristol. His three main points, speaking from a Catholic perspective, were: firstly, mutual ground with others means standing on our own ground instead of on neutral ground; secondly, the truth of revelation is to be found in the Catholic tradition; and thirdly, the best way to understand others is, a Catholic perspective.

With regard to his claim of people standing on their own ground instead of on neutral ground, we argued that he was conflating two different concepts. Individual people and religious and nonreligious organisations should stand on their own ground within society. However, in order to protect and vindicate everybody’s rights to do this equally, it is the state, and not the population, that should stand on neutral ground. The phrase that we use in Atheist Ireland to describe this distinction is that we want a secular state for a pluralist people.

Unfortunately, Prof D’Costa repeated the bizarre assertion that Cardinal Murphy O’Connor had previously articulated on BBC radio: the claim that atheists are not fully human. Had we not been there, it seems likely that this claim would have gone unchallenged. When we questioned him about this claim, and its appropriateness in a conference about pluralism, he repeated the claim, arguing that it is religious revelation that tells us what being fully human is, and he described atheists as being not fully formed.

He also argued that atheism is a religion, although he did at times describe it as a nonreligious position. When we questioned him about this, he acknowledged his inconsistent definitions, and said that his dilemma was that, in terms of dealing with others, we should respect the self-identity of others, and that atheists could describe atheism as not being a religion, but that if we did, we were just kidding ourselves.

There were six workshops in the afternoon, and the one that Jane and I attended was titled Imagining the Future: Religious Pluralism in Educational Practice in Ireland. The speakers were Dr Jones Irwin of St Patrick’s College in Dublin, Dr James Kapalo of University College Cork, and Dr Rik Van Nieuwenhove of Mary Immaculate College.

He said that St Patrick’s College had recently introduced a new optional comparative ethics programme as an alternative to the Roman Catholic religious education module that is required by the church in order to teach in Look schools. However, he said that only two students had taken up this option, because of the imbalance of job opportunities caused by the domination of Catholic schools.

Dr Kapalo Said that he supported an approach to religious education but was not anti-God, and he said that to study religion effectively you need to do so from within, with definable skills and interaction with people from the religions that you are studying. He added that you can do this using procedural neutrality, and a position of methodological agnosticism.

Dr Van Nieuwenhove argued that there is no neutral ground between Catholicism and secularism. He said that inclusiveness does not mean including everybody and everything, and that you should first be steeped in your own tradition before you can dialogue with other traditions. He said that multidenominational education cannot explore the richness of any single worldview, and that you cannot take the position that no single perspective is correct.

Like Prof D’Costa earlier, Dr Van Nieuwenhove raised the “not fully human” issue, this time from the more euphemistic perspective of arguing that Catholic education enables you to become fully human. When we questioned him on this, he used an analogy of atheists seeing a photograph in two dimensions and Catholics seeing the same photograph in three dimensions.

The conference ended with a keynote address from Dr Anne Looney, the Chief Executive of the National Council for Curriculum and Assessment. From our perspective, her most significant argument was that you cannot teach religion objectively because it is important to get children excited about the subject in the same way as you try to get them excited about history and reading and music and other subjects.

Our closing contribution from the floor was to thank the organisers, and particularly Dr Patricia Kieran, for such a useful day. We accepted the good faith of the organisers in seeking to discuss pluralism, but we pointed out some blind spots in the religious perspective from which they were working.

For example, the title of the conference was Religious Pluralism in Educational Practice. This assumes that the nonreligious perspective can be subsumed within the category of Religious. We said that a more inclusive title would have been either Religious and Nonreligious Pluralism, or else just simply Pluralism.

Also, the information packs for the conference included a leaflet promoting a Symposium on Catholic Education and the New Evangelisation, and there was a book stall hosted by Veritas. We said that many Christians attending a conference on the subject of Pluralism would have been surprised if the information packs had included adverts for a Richard Dawkins conference, and the book stall was hosted by the Richard Dawkins Foundation.

And when two separate speakers listed the 2006 Irish census figures for the question on religion, neither of them included the figure for ‘no religion’, which at 186,000 was the second largest category after Roman Catholic.

Overall, the conference was very worthwhile. We heard and took part in useful discussions about pluralism in Irish education, we met interesting people with whom we will maintain contact, and we were there to ensure that some of the common yet strange prejudices against atheists did not go unchallenged as they otherwise might have done.

Does the synodal process show that the State is endowing the Catholic Church in schools?