Welcome to this special Darwin Day edition of Secular Sunday. As you all no doubt know, Charles Robert Darwin was born on 12 February 1809. His book On The Origin of Species , published when he was 50, described for the first time a plausible and robust theory of evolution that revolutionised the field of biology and in the words of Richard Dawkins “made it possible to be an intellectually fulfilled atheist”.

There are two Darwin Day events taking place today so drop everything and try to get to one of them:

If you can’t make it to either event, and have cable or satellite television, Discovery Science has a two-part documentary entitled “What Darwin Never Knew”, starting at 5:00 pm. 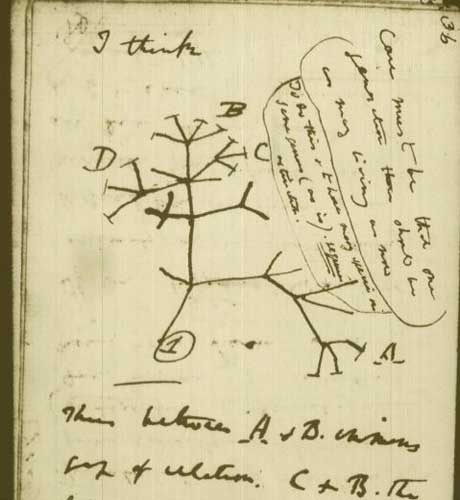 If all this talk of Darwin has made you want to learn more about him then you couldn’t hope for a better resource than The Complete Work of Charles Darwin Online. This staggeringly vast site has enough to keep Darwin enthusiasts busy for years, with copies of all Darwin’s books, numerous translations, high-resolution scans of original manuscripts, letters, drawings, journals, notes and even his wife’s recipe book! There are audio versions of most of his books, although the majority of these are produced by text-to-speech software which some users may find annoying.

For offline reading, Project Gutenberg has an extensive collection of Darwin’s books in a variety of e-reader formats.
Librivox has audio versions of several of Darwin’s books. These are read by volunteers so quality may vary, but you may find them preferable to a machine-read version.

If you’ve already read all of Darwin’s books, or are just too lazy (I’m not judging you!) you can watch Richard Dawkins’ documentary The Genius of Charles Darwin.

And that’s it for another week. I hope you can make it to one of the Darwin Day events. We’ll be back next Sunday with more news and links. In the meantime, get all the latest news on our website, Facebook and Twitter. I’ll leave you with a quote from the man himself:

“As man advances in civilization, and small tribes are united into larger communities, the simplest reason would tell each individual that he ought to extend his social instincts and sympathies to all members of the same nation, though personally unknown to him. This point being once reached, there is only an artificial barrier to prevent his sympathies extending to the men of all nations and races.”
― Charles Darwin, The Descent of Man

Till next Sunday, keep evolving.