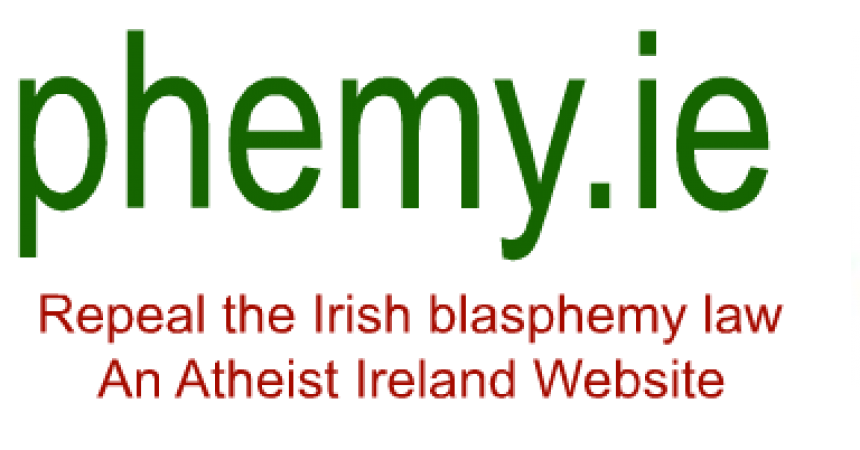 On Tuesday 31st January, along with Professor David Nash of Oxford Brookes University, Committee members of Atheist Ireland met with TDs, Senators, and their representatives, at Leinster House to brief them on the need to repeal the Irish blasphemy law.

Atheist Ireland Chairperson, Michael Nugent began by giving a background of Atheist Ireland’s position on the defamation act, in particular regard to the blasphemy article, elaborating on the flaws in the law, such as how it doesn’t protect religious belief but criminalizes free speech, and incentivises outrage by making the expression of outrage the first test of whether something is blasphemous.

He said that there was also the assumption that the blasphemy law would never be used, but that it could have unforeseen circumstances. Reference was made to the X case in relation to the prior pro-life referendum, where the government at the time assumed that this would not stop women from traveling abroad, yet the State took an injunction against a teenage girl as a result of that amendment.

Nugent noted that the Council of Europe (Venice Commission) recommended in 2008 that all Blasphemy laws should be repealed, and that we were represented on that by a senior member of our Attorney General’s office. Ireland informed the Venice Commission in 2008 that our existing law provides adequately for these matters and there was no need for further legislation.

Nugent also pointed out the International impact and how the wording of Irish law was used by Pakistan at the UN to lobby for international resolution, and use of the Irish law in the debate in Indonesia when they debated the relevance of their law. He raised the specific issue of Indonesian civil servant Alexander Aan who is currently facing blasphemy charges for writing on Facebook that God does not exist. Nugent concluded on the need to secularise the constitution generally.

David Nash began his presentation on the historical impact of the UK blasphemy law and how it impacted British common law in later times. He outlined how the Irish law is brand new and the legal anomalies its inception created, and how it follows no other model from anywhere in the world.

Nash also referenced a case in the UK from the 1920’s where attempt was made to modernise UK Blasphemy law, and civil servants advised that it was impossible to protect all religious beliefs from criticism. He pointed out how Mary Whitehouse reinvented Blasphemy in the UK, but that the law was later recognised as anachronistic and thus repealed.

He said that there is also the worrying fact that far-right groups can demand protection under blasphemy laws, by describing their views in a quasi-religious manner. He pointed out that the new Irish law demands “intention” and spoke of the difficulty to prove intention in court, and how the Irish law is difficult to interpret or define. One such example is the defence of “Genuine Literary Merit,” and Nash questioned what “False Literary Merit” was.

David Nash concluded his presentation with a message from the UN special Rapporteur for Freedom of Religion, Heiner Bielefeldt. He had asked David to convey to the TDs and Senators that Ireland is going in the opposite direction from every western country with regard to blasphemy laws, and that Ireland cannot pretend that this is only a domestic issue, as it has an international impact and the world is watching.

The response from the TDs and Senators was very positive, and the following courses of action were discussed:

“Leinster House (Dáil Éireann and Senead Éireann)” by Can Pac Swire is licensed under CC BY-NC 2.0

The Religious Test to be Ceann Comhairle