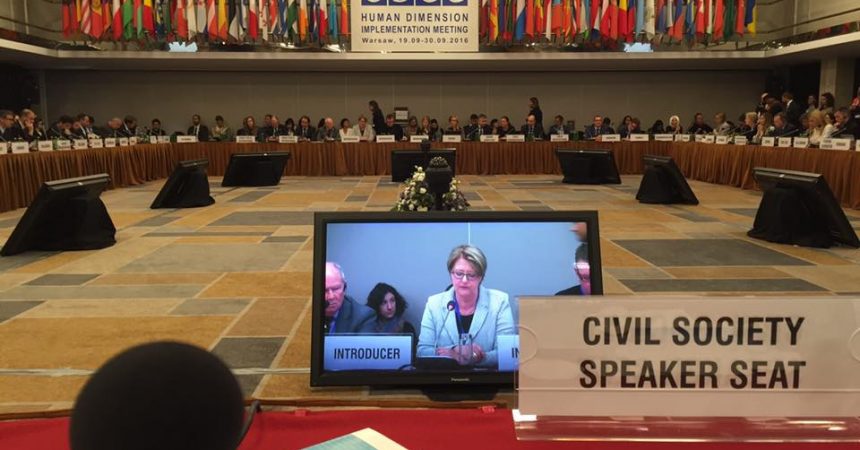 The HDIM is a forum where OSCE participating States together with Partners for Co-operation, civil society, OSCE institutions and field operations and other international organizations discuss the implementation of human dimension commitments that were adopted by consensus at prior OSCE Summits or Ministerial Meetings.

Michael Nugent and Jane Donnelly attended the Conference on behalf of Atheist Ireland.

Working sessions are held on each day of the Conference, on subjects relevant to particular OSCE commitments. The particular session that we wanted to attend was on ‘Freedom of thought, conscience, religion or belief ’ and this was on Tuesday 27th of September. We intended to take the opportunity to speak on behalf of Atheist Ireland at this meeting.

One of the vital points with regard to these meetings is that NGO’s have an opportunity to address the full conference. Delegations from the Irish Government and the Holy See attended the Conference, among many other OSCE members states.

We had arrived in Warsaw on the Monday morning and took the opportunity in the afternoon to attend a meeting on ‘Freedom of Expression, free media and information’. Here we examined how the system worked as this is a huge conference with delegations from various countries, interpreters and NGO’s. Approximately sixty NGO’s also decided to speak but we were not letting this opportunity pass us by and arrived early on Tuesday morning for registration. The more NGO’s that wish to speak the less time every organisation gets with the result that speakers must constantly reduce their speech. The first lot of speakers usually gets more time to speak but this reduces as the hours pass. We were second in line to speak and the following is the spoken contribution by Michael Nugent, chairperson of Atheist Ireland, to the OSCE Human Dimension conference.

“There is an interesting phrase on the OSCE website, in which the OSCE pledges to combat “all forms of racism, xenophobia, and discrimination, including anti-Semitism and discrimination against Christians and Muslims.” But why are these three religions given this special emphasis? Surely it is members of smaller religions and atheists who are most subject to religious discrimination and intolerance?

The Holy See delegate said yesterday, and I agree with him, that we should respect the dignity of the human person. This comes from an organisation whose Cardinal Murphy OʼConnor has told the BBC that atheists are not fully human. Can you imagine the outcry if an atheist was to say that about members of any religious organisation?

In Ireland, we have a new government that has inherited a system which discriminates seriously against atheists. We are starting a presidential election campaign in which atheists cannot run, because you have to swear a religious oath to take office. The same applies to becoming a judge in Ireland. Ireland became the first country in the 21st century to pass a blasphemy law a couple of years ago. Our education system is controlled 90% at primary level by the Roman Catholic Church, which uses a system of permeating a Roman Catholic ethos throughout the entire curriculum. I am hopeful, or certainly more optimistic, that under our new government these issues can be tackled, but they are urgent and they need to be resolved as soon as possible.

At an international level, a conference in Dublin earlier this year launched a newly restructured group called atheist Alliance International, which will be advocating for atheism and secularism on an international level. We have passed a declaration called the Dublin Declaration on Secularism, which is available on the OSCE website, under Atheist Ireland’s submission, and I urge all delegates to read that and to support it.

I will end by saying that religious States promote religion. Atheist States promote atheism. We want a secular State, that promotes neither, that respects everybody’s rights and that is neutral on the issue of religion. A secular state is the only way to protect equally the rights of religious and nonreligious people. Thank you very much.”

You will find at this link the longer written submission from Atheist Ireland to the Conference.

The delegation from the Irish Government had a right of reply to our comments but they did not take up this opportunity.

Side meetings also take place during the lunch break and in the evening after the main session ends. We attended two of these meetings.

The first one was held by The Foreign & Commonwealth Office, United Kingdom. The title of the meeting was: Developing a Strategy for securing Freedom of Religion or Belief in the OSCE region. The purpose of this side event was to discuss how Member States can promote and defend freedom of religion or belief and the OSCE’s role in helping them do so. There were guest speakers and we again had an opportunity to make ourselves heard.

The second meeting was held by the European Humanist Federation. The title of the meeting was: How can Freedom of Religion and Belief be reconciled with Equality and Non-Discrimination in Democratic Societies? We succeeded in having more than a passing input into this event.