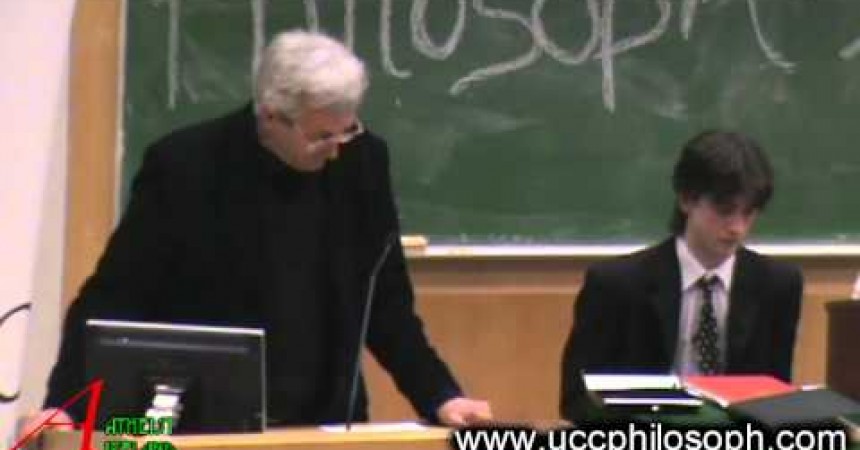 The following video is on our YouTube channel. It’s Professor Brian Bocking at a UCC debate last year, proposing the motion ‘that this house rejects atheism’.

For context, Professor Bocking founded UCC’s Study of Religions Department, which studies theories of religion and atheism in a methodologically agnostic way. For clarification, he has said on our YouTube channel that the arguments that he made in this debate apply as much to theism as they do to atheism, and that his argument was﻿ against the elevation of any ‘-ism’ over the service ethic in matters of government.

Paul Hannah of Brisbane has written the following response to the specific arguments made by Professor Bocking in the debate.

As atheism is not a religion we have no supreme leader to speak for us, nor could that be possible. Atheists can be conservative, liberal, racist, homophobic, democratic, communist, socialist, sports mad and sports indifferent. We are so diverse that no one *could* represent us. However, as an atheist I feel qualified, at least in some respect, to correct a few misapprehensions you appear to have in relation to people like me. So when I say ‘we’ below, I speak only from my experience and not as any sort of spokesperson.

1. No atheist I know wants to run your life or anyone else’s, we strive for a life untainted by theistic influence and oppression.

3. Atheism is not an expression of certitude or even certainty, we just reject all current arguments for the existence of god or gods. A – theism – we are without god. I, and all atheists I know, would believe in a god if there was any credible evidence to support the proposition. I am as certain as I can be, but that is far from saying I am certain by any common definition of the term.

4. The idea of Institutionalised atheism is absurd. I must say it is a bit rich to be accused of this from the theistic side, the institutions of religion cover the globe, there must be 5 or 6 churches within a couple of kilometers of my house. There is even a church that claims to be an entire country! Everywhere I have been in the world (I have so far visited 20 countries in five continents, admittedly North Korea is not on that list ) religious institutions abound. Yet I have not seen a single office, let alone building devoted to the promotion of atheism. I belong to a group, but this is so bent on not being an institution, no records are kept, no fees extracted and no one is excluded. it is hard to think of what binds us until we remember we all just don’t believe.

5. You said atheism is “a universalist belief” and “atheists think that atheism is a fact and everybody ought accept atheism”. Yes, we believe atheism is a fact. And to some extent many of us believe people should accept this, however, there is no universal compulsion upon us to proselytise, no organisation to exhort us to do so and no philosophical reason for us to do so. Whereas we can say that “X is not a true Christian” as they do not seek to convert all non believers they meet. The same can’t be said of atheists, as the only qualification to belong with us is that you don’t believe in a god.

6. Whilst amongst ourselves we may joke about being evangelical atheists, I suspect few, and certainly none I know, are such. Has an atheist ever knocked on your door trying to deconvert you? I would prefer that the world around us was seen for what it is, simply because of the great harm I see caused by religion and I would like everyone to be as free as I am in that regard. However, providing this mass primitive delusion doesn’t impact on my life, I don’t care what others believe. We argue, challenge and debate the issues, but certainly for me, and I have heard others say the same, we have no hope of converting theists. We play to the crowd, somewhere in amongst them there may be a person unsure of their atheism, unaware that they can have allies and even friends. That theists may shun them but they will not be alone.

7. Your claim that we are extraordinarily similar to a religion is clearly wrong. There is no structure, no hierarchy, no institution, no creed, no dogma but most of all, there are no supernatural claims. We offer nothing but freedom from religion, we propose no reward, no punishment, we lay down no rules for living, or dying. There is no ritual, no compulsion, no claim of eternal truth, no moral injunctions, no incitements to violence, no penalty for leaving us nor no reward for joining.

9. Yes many of us believe in the authority of reason and logic. However, if I met an atheist who didn’t, I couldn’t say he ‘wasn’t a true atheist’ as all that he needs to do to qualify for that moniker is not to believe in a god.

10. I’m not a professor but I do have a degree from a recognised university and I’m both agnostic and atheist. I didn’t stop thinking when I became an atheist, that was when I truly started. Real understanding came from not filtering knowledge through bronze age myths and superstition.

11. You said “Atheists are not the sternest critics of religion” if we’re not I’d like to meet those who are. I don’t see Moslems and Christians publicly debating each other’s failings on the internet or elsewhere. Atheists seem to me to be the ones getting them to face up to their primitive baggage.

12 It’s true, atheism isn’t secularism, if the world governments were secular, we would have nothing to complain about. That is all every atheist I know wants.

13. We are indeed persecuted, I have had a religiously based death threat for publishing an essay on an Anglo-Saxon king, several of the people who have been to our meetings have been similarly threatened.

What atheism truly is, is result of the slow steady march of humanity from the darkness of ignorance towards the light of reason. We no longer need primitive explanations for the natural world, we no longer need the sop of religion to support us when the night is dark and lightning crashes. However churches, mosques and synagogues around the world rely on the science behind lightning rods.

Atheists in the Pub - Dublin

The really, truly True Believer™ of the Month Award July 2011