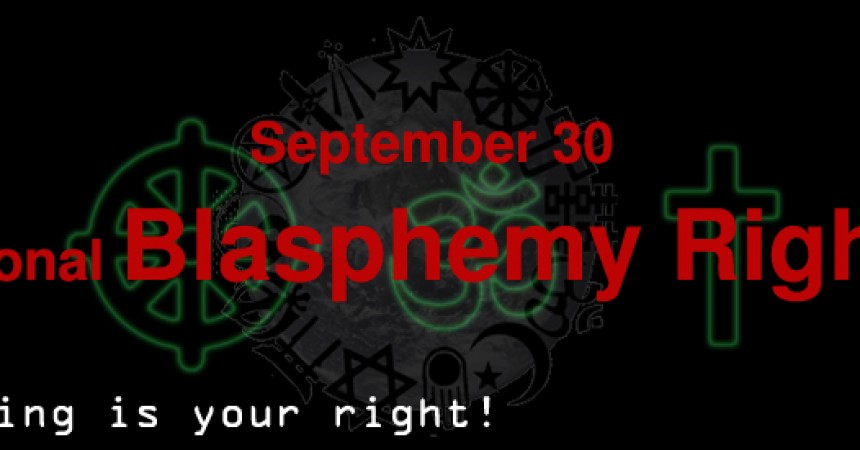 Today is International Blasphemy Day, administered by the Center For Inquiry as part of its Campaign for Free Expression. Atheist Ireland is an advocacy group for an ethical and secular Ireland: see details in these Irish Times articles on the Irish blasphemy law and our first AGM.

Atheist Ireland is seeking your help today to launch and shape a new long-term campaign with two important aims: to repeal the new Irish blasphemy law and to attain a secular Irish Constitution. Specifically, we are asking you to do three things: send us a message of support, get actively involved in shaping this project, and lobby to persuade Irish politicians to pursue these policies.

We will soon be holding public meetings around Ireland to launch this campaign. We want it to include religious and nonreligious people working together, within Ireland and with international support. The campaign has one common aim that transcends any other differences we may have: that all Irish citizens, of all beliefs and none, can live together in equality, with the State being neutral on matters of religion.

In recent decades, several independent and all-party committees (most whose members were Christians) have repeatedly called for an end to discrimination against nonreligious citizens in our Constitution. Not only has this not been done, but a new religious crime has now been created. The blasphemy law is the final straw. We need a secular Irish Constitution, and we need it now. Please help to make this happen.

The Defamation Act 2009 makes blasphemy a crime punishable by a €25,000 fine, after the Minister for Justice signs the commencement order in mid-October. Blasphemy is defined as “matter that is grossly abusive or insulting in relation to matters held sacred by any religion, thereby causing outrage among a substantial number of the adherents of that religion” with safeguards to make it harder to prosecute.

Regardless of the detail, it is wrong in principle for a modern democratic republic to have any type of blasphemy law. Theological thought-crimes belong in the past. Religious and nonreligious people alike should be protected from harm and incitement to harm, but religious and nonreligious ideas alike should be open to any criticism. That is how human knowledge progresses. Blasphemy laws discriminate against nonreligious citizens, by protecting the fundamental beliefs of religious citizens only.

We have a blasphemy law because the Irish Constitution of 1937 says we should have one. And our Constitution also discriminates against nonreligious citizens in many other ways. For example, you cannot become President or a Judge unless you take a religious oath asking God to direct and sustain your work. So up to a quarter of a million Irish people cannot hold these offices without swearing a lie. This is contrary to Ireland’s obligations under the UN Covenant on Civil and Political Rights.

The Preamble states that all authority of the State comes from, and all actions of the State must be referred to, the Most Holy Trinity. Article 44 states that the homage of public worship is due to Almighty God and that the State shall hold His Name in reverence. This is not merely an assertion of the right of citizens to worship this god. It is an assertion of the right of this god to be worshipped by citizens.

The Constitution also contains many other references to this god and to religion generally. Our national parliament reflects this by starting each day’s business with a prayer explicitly asking the Christian God to direct all of their actions. Under this guidance, they have legislated for many public policies that are heavily influenced by religion.

We should be removing these 1930s religious references from our Constitution, not creating new crimes to enforce them seventy years later. A modern secular Constitution would allow all citizens, whether religious or nonreligious, to live together as equals with the State being neutral on matters of religion.

Our Request to You: Please Help This Campaign

The blasphemy law is the final straw. We now need a secular Irish Constitution. We will soon be holding public meetings around the country to shape this campaign for equality for and by all Irish citizens, of any or no religious beliefs. But we will be much more likely to succeed if we have national and international support.

Here are three ways that you can help:

One, please send us a message of support. Just a few lines will do. We want to be able to show that there is a wide support for these ideals.

Two, please let us know if you would like to get actively involved in any way. You are more than welcome to help shape how this project evolves.

Three, in whatever way you can, please help to lobby Irish politicians at national and international level to implement these policies.

This will be a lengthy campaign, but a very worthwhile one that you can be proud to have played your part in. We look forward to hearing from you.

The conceit of hindsight.