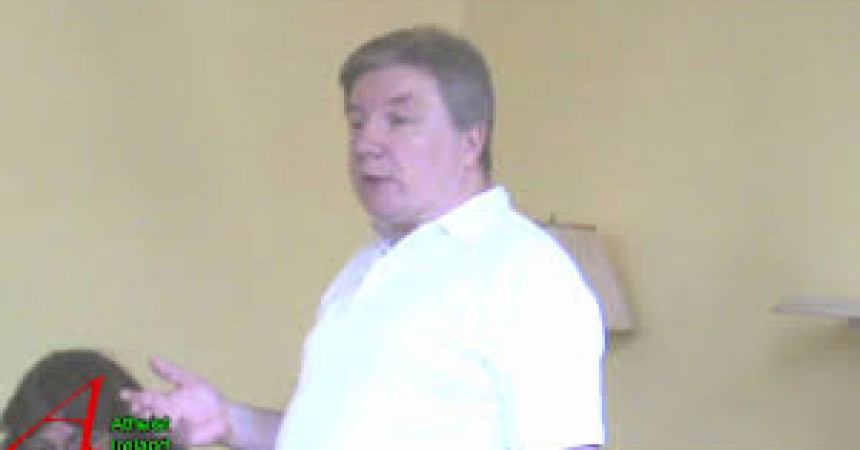 Public information meeting on the introduction of a new blasphemy law held in Cork.

Michael Nugent speaking at a public meeting on the introduction of a blasphemy law. The meeting was held in Cork in 2009.

The Minister for Justice is proposing to amend his new blasphemy law by providing, as a defence, that a person accused of blasphemy can prove that a reasonable person would find genuine literary, artistic, political, scientific, or academic value in the blasphemous matter.

He is not proposing to reduce the fine of €100,000, the onus of proof is on the defendant to prove this new line of defence, and the police may still seize and destroy blasphemous statements. The Ministers proposed blasphemy law now reads like this:
1. A person who publishes or utters blasphemous matter shall be guilty of an offence and shall be liable upon conviction on indictment to a fine not exceeding €100,000.
2. For the purposes of this section, a person publishes or utters blasphemous matter if (a) he or she publishes or utters matter that is grossly abusive or insulting in relation to matters held sacred by any religion, thereby causing outrage among a substantial number of the adherents of that religion, and (b) he or she intends, by the publication or utterance of the matter concerned, to cause such outrage.
3. It shall be a defence to proceedings for an offence under this section for the defendant to prove that a reasonable person would find genuine literary, artistic, political, scientific, or academic value in the matter to which the offence relates.

Edit: as of 1st January 2010 the law has come into effect with a fine of €25,000. Atheist Ireland continues with its effort to have a referendum to remove blasphemy from hte Irish Constitution.