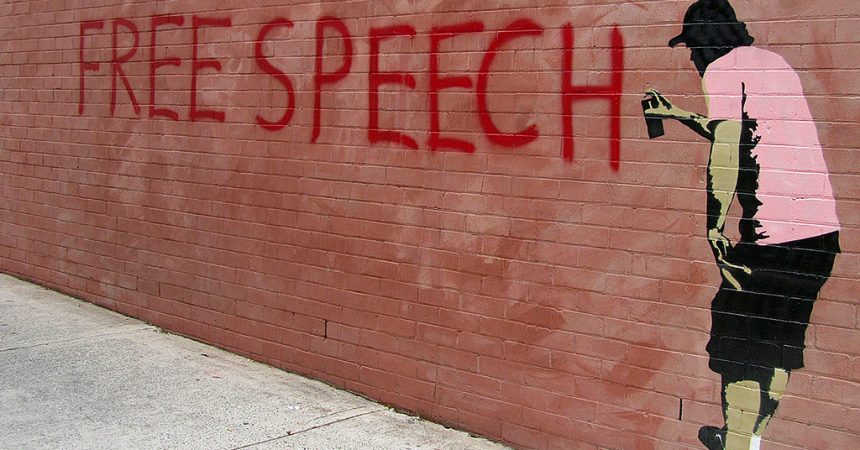 The Limits of Free-Speech:

“Both these individuals have engaged in unacceptable behaviour by inciting hatred against a number of communities,”

The above was the justification given by a UK Border Agency spokesman following the recent decision by the British government to prohibit Fred Phelps and his daughter Shirley Phelps-Roper from entering the UK, where their group, the Westboro Baptist Church, had planned to protest the staging of the Laramie Project, a play concerning Matthew Shepherd, a student from Wyoming who was murdered because he was homosexual.

Similarly, a “threat to public order” was the reason given for the exclusion of Geert Wilders, who had planned to attend a screening of his controversial anti-Islamic film ‘Fitna’ (see Adam’s entry below).

Closer to home, last year a planned debate to be hosted by the UCC Philosophical Society featuring the holocaust-revisionist David Irving (ironically, on the topic of Free Speech) had to be cancelled in the face of security concerns. A blogger in an article on indymedia argued: “ this debate will be used by fascists to organise in the Cork area. This incident is a further vindication of our argument that giving fascists a platform is completely wrong and shows clearly that Nazis are seeking to exploit this event to spread their poison.”

More recently, a planned address by former Taoiseach Bertie Ahern at NUIG had to be cancelled due to protests by students. A statement by the “Republican Socialist Youth Movement” bragged that the protestors had: “scored a great success which saw the cancellation of a planned event at the National University of Ireland, Galway, honouring Bertie Ahern. FEE (who exemplifies the idea that education is a right, not a privilege) organized this protest in accordance with their stance that as long as fees are being introduced for 3rd level educational institutions no Fianna Fáil TD shall gain entry to NUIG.”

The right of free speech

It is commonly understood that the Right of Free Speech is not absolute. What are less commonly agreed upon are the criteria for limiting this right. Lines must be drawn, but where? The answer may not be as elusive as one might think. I propose that we solve this problem in two steps. Firstly, by accepting the arguments given for the right to express one’s opinion given by the philosopher John Stuart Mill in ‘On Liberty’, and secondly, by drawing a distinction between voluntary and involuntary exposure to opinions.

Mill gives three main arguments as to the importance of free speech, which I paraphrase here:

1. We are not infallible possessors of perfect knowledge. Silencing an opinion assumes that we know it to be false, and we can almost never be certain of this.
2. If an opinion is in error, it may not be wholly so. There may be something to learn from it, it may contain grains of truth, and it is therefore to our advantage to engage with these opinions, so that we might come closer to the truth of the matter.
3. Even if neither of the first two conditions apply, even if we know the opinion to be entirely false, asserting the truth as mere dogma is damaging to our own sense of rationality. True beliefs need to be explained and understood, and this can only be done by measuring them against false beliefs and showing exactly why some beliefs are true and others false.

Applying the arguments of Mill

Consider the four cases above. While there is certainly no real merit in any of the ‘arguments’ espoused by the Phelps clan, being exposed to the absurdity of these will in fact strengthen the beliefs of all reasonable people who encounter them in the same way watching Ray Comfort offer the design of a banana as evidence for God’s existence does the Intelligent Design faction far more harm than good (if you don’t believe me, Google ‘banana man evolution’). Even Andrew Schlafly (he of conservapedia fame) is forced to resort to implying that Phelps must be some kind of liberal agent provocateur.

As for Geert Wilders, the irony in protesting the portrayal of your religion as a violent one by calling for the death of the portrayer seems to have been lost upon certain people. Clearly this is a case where it might be possible to wade through the bigoted content of Fitna and weed out one or two kernels of truth. I say this is merely a possibility, but we cannot know unless we are able to see the film and judge for ourselves.

The case of David Irving is one which applies to Mill’s third point above. An open debate would have allowed Irving’s claims to be demolished by any historian worth his salt. Instead, silencing Irving (and Phelps, and Wilders) has the effect of creating martyrs, of stoking suspicions of conspiracy and the suppression of truth. If these truths are actually allowed out into the daylight of public discourse, only then can they be shown for what they truly are.

The protests against Ahern can be tied to Mill’s first point. Not every student is against the introduction of fees. It is a complex debate which needs to be discussed. A debate which was prevented from occurring because one group took it upon itself to decide for the rest of the students at the college that so long as their demands were not met, the freedom to voice dissent would be denied to their opponents.

This brings me to my final point, on the need for a distinction between voluntary and involuntary exposure to free speech. Even if we accept Mill’s three points, the fact remains that it is simply impractical for all opposing views to be heard in certain contexts.

For example, students in public schools should learn about chemistry, but not alchemy, astronomy, but not astrology, evolution, but not intelligent design, and so on. Creationists frequently appeal to the right to free speech in asking for their theories to be taught alongside the scientific view. We can avoid conceding that minority views ought to be taught in these cases by appealing to practicality. Limits on time and resources necessitate that scientific or historical theories which are backed by vast amounts of evidence be taught at the expense of outdated, or unsupported views whose value lies only in demonstrating their falsity in the face of the superior theory.

Beyond public schools, where time and resources place limits upon what material can reasonably be covered, I can choose what book to read in the library, what television program to watch, what website to visit, and what lecture to attend. In a free society I am and ought to be able to use my own time and energy to inform myself about whatever theory I wish, no matter how unlikely it may be.

The line ought to be drawn, however, at the point where my actions prevent others from voluntarily pursuing ideas which are not being imposed upon me.

There is virtually no point to supporting the notion of a right to Free Speech, if we are willing to extend this right only in cases where we agree with the ideas being expressed. To suggest that some opinions are both so blatantly false that they can be conclusively refuted, which holding that these beliefs are too dangerous to be let lose amongst the general public, is to take the arrogant and elitist position that most people are simply too unintelligent to spot absurdity when they encounter it. The fact that a large portion of the population do indeed believe certain absurd religious propositions can be attributed to the kind of dogmatic thinking (or lack thereof) which Mill is at pains to prevent with his arguments for freedom of thought and expression.

“FREE SPEECH” by Newtown grafitti is licensed under CC BY 2.0