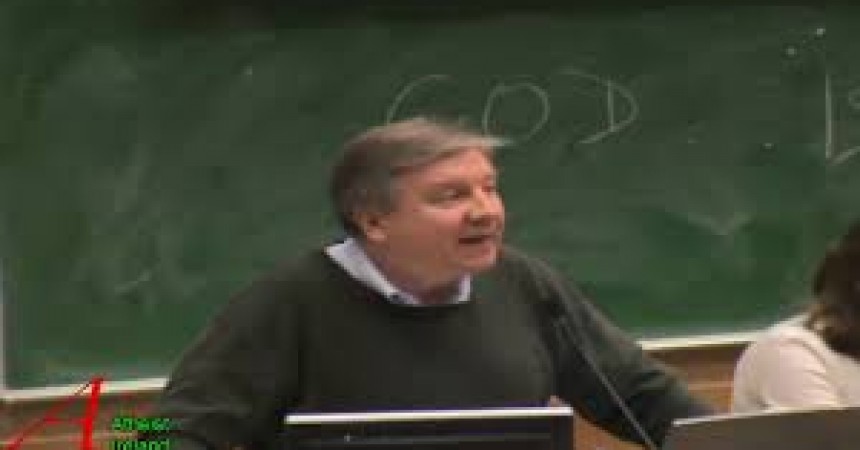 The following is the contribution by Michael Nugent to a debate at the Philosophical Society of University College Cork, on Monday 23rd of February, in support of the motion that ‘God is Fraud.’

Thank you for inviting me, and it is a pleasure to be here. I am going to suggest this evening that the ideas of God as an intervening personal supernatural being, and God as a moral guide and lawgiver, are both false. And I am going to suggest that the ideas of God as a personal commitment to unconditional love and goodness, and God as an impersonal force, are separate ideas that need to be disentangled from the first two false ideas.

God as a supernatural being

Let’s start with the false idea of God as an intervening supernatural being.

I’m including in this all of the supernatural claims attributed to God, from creating the world out of nothing, to impregnating a virgin in order to give birth to himself, to answering or ignoring millions of prayers every day, to turning pieces of bread and volumes of wine into his own body and blood every time a validly ordained priest of the human species on the planet Earth chooses to pronounce a certain set of words.

This type of thinking exists in the same intellectual realm as magic and superstition and witchcraft and sorcery. Last year the Pope announced a special promotional offer: if you visited Lourdes during 2008, you would get a free ‘plenary indulgence’ which would give you early release from a place called Purgatory after you die, and this would get you to a place called Heaven faster.

In any other field, making claims like this, particularly claims aimed at sick and vulnerable people, would be clearly seen as fraudulent. And I suggest that we should apply the same criteria to fraudulent claims about Gods.

God as a moral guide

Now let’s look at the second false idea, which is that of God as a moral guide

Wherever we get our morality, we do not get it from books like the Bible and the Koran, regardless of whether we read these books literally or metaphorically.

Here’s what happens what we read these books. When we see passages telling us that it is good to love your neighbour as yourself, and to be kind and forgiving to each other, or we read the story of the good Samaritan, we say: yes, those are morally good ideas.

When we see passages telling us that it is good to stone a man to death for gathering sticks on the Sabbath, or to stone a woman to death for not being a virgin on her wedding night, or to kill Babylonian infants by dashing them against rocks, we say: no, those are morally bad ideas.

Let’s be clear about what is happening here. In each case, we are applying our own sense of morality to the passages that we read in this book, and not the other way around. At best, you can use the supposed words of God, to selectively vindicate your already-existing sense of right and wrong, but not to get your sense of right and wrong.

God as a personal commitment

Thirdly, I want to look at the idea of God as a personal commitment.

This can be a useful belief. It can give a sense of meaning and hope. And it can lead to helpful behaviour such as people being kind to each other. But the problem is that this useful idea has become entangled with the first two false ideas of God. So, in order to manifest your personal commitment to unconditional love and goodness, you have to reconcile it with the creation myths and underdeveloped morality of Bronze Age and Iron Age tribes.

And so you end up with tragic situations like Mother Teresa, the world’s most famous closet atheist, who we now know spent the last fifty years of her life in continual inner torment because she did not believe in God, yet also fervently believed that she had to believe in God in order to manifest her personal commitment to unconditional love and goodness.

She wrote regularly to her superiors, asking them for advice, but all that they could tell her was to offer her spiritual dryness to God as a special gift. Whereas they could and should have been able to say: you know about Adam and Eve and the talking snake and the burning Bush and the flood, and how we now recognize that these are all only metaphors? Well, the same is true about God. God is also a metaphor. He doesn’t really exist. Now continue on with the good work that you are doing in helping sick and vulnerable people.

God as an impersonal force

Finally, I want to look at the idea of God as an impersonal force.

This is a very different idea to any of the first three ideas of God. At its broadest, this idea can be that the universe and the laws of nature are God. This idea is harmless in itself. But it creates an illusion that there is greater support for the idea of a personal God, because it uses the same label to describe a very different idea.

For example, surveys show that approximately nine in every ten Americans and Europeans believe in God. But when you go beneath this question, you find that only two thirds of Americans, and just over half of Europeans, believe in a personal God. So, for the sake of clarity, we should stop attaching the label God to the very different idea of an impersonal force.

I want to close by saying that I am not suggesting that people who believe in these ideas are themselves fraudulent. There is no doubt that the Bible itself has been deliberately and fraudulently altered over the centuries. There is even a word for this: pious fraud. But false ideas of God are usually spread more like a pyramid scheme, with innocent people unwittingly passing on false ideas to other innocent people.

However, underneath that, I want to make the following suggestion: if you make claims about the nature of reality, particularly if you make unlikely claims about the nature of reality; and if you encourage other people to change their behaviour, or indeed change their lives, based on those claims; then you take on the onus of proof that the claims can deliver what they are promising.

Otherwise, the claims are fraudulent. And so I second the motion that God is fraud.

A hundred religious symbols hanging on a wall?